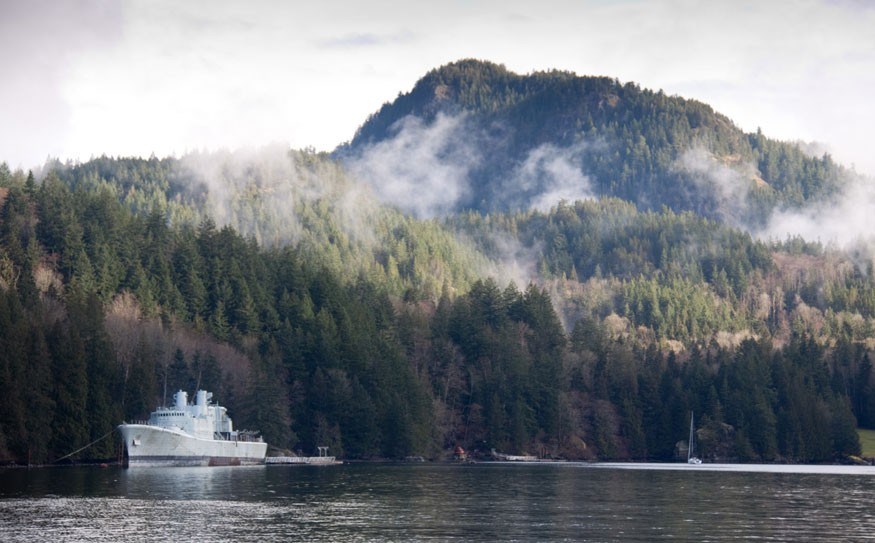 Scuttle trouble Gambier Island residents object to the Annapolis being sunk as a reef. Photo by Russell Clark

It's become a heated battle over the past four years — namely, the controversy over the proposed scuttling of the HMCS Annapolis in the waters of Halkett Bay Marine Park, off Gambier Island in Howe Sound.

The Artificial Reef Society of British Columbia (ARSBC) purchased the decommissioned navy submarine destroyer from the federal government in 2008. Since then it has been seeking permission to sink the 110-metre ship in Halkett Bay to serve as a diving attraction while creating an artificial reef for fish.

But the plan for the Annapolis ran into trouble from the start when island residents objected.

"One of the biggest things we are worried about is the lack of transparency around this issue," explained Gary MacDonald of Save Halkett Bay campaign.

He points out that the Annapolis has been subject to a number of government inspections over the last few years, but those reports have not been released to the public.

Another concern is the potential leaking of polychlorinated biphenyls (PCBs) and other contaminants from the sunken hulk. The recent termination of the U.S. federal artificial reef program is a case in point, said MacDonald. The program, which was responsible for the sinking of 45 ex-navy ships, ended in May this year due to the discovery of untold tonnes of PCBs and heavy metals built into the old vessels.

Proponents of the artificial reef argue the ship has been stripped of any harmful substances during the vigorous four-year clean-up program, which included the removal of cabinets, piping, wires and motors.

Russell Clark of the Shipwreck Exploration and Conservation Society, said, "It's probably going to be one of the cleanest ships ever to be sunk. I myself have been on there with little bits of tissue paper mopping up grits of oil."

And the benefit to marine life can be astounding, added Clark.

"It is desolate, so the inclusion of the Annapolis in that particular area is going to be really good because ... you'll end up with an actual habitat and over years it turns into a city block of marine life."

He believes the sinking will generate more business for dive shops and charters.

"It will put Vancouver on the map as a diving destination."

Berny Hanby has spent 35 years diving the B.C. coast and is co-author of Marine Life of the Pacific Northwest.

The economic spin-offs of artificial reefs are questionable, he said, adding that he believes the recreational dive industry is, in fact, retreating instead of expanding.

But his main complaint is the location.

"I am not opposed vehemently to the sinking of these vessels," he said. "Halkett Bay is just the wrong spot."

The Department of Fisheries and Oceans (DFO) in their initial assessment of this project advised re-location, he noted.

The group is calling on the provincial and federal governments for a moratorium on any further activity until a thorough environmental assessment takes place.

ARSBC president Howie Robins confirmed there is no official sink date set, noting it is subject to pending environment permits from Environment Canada.