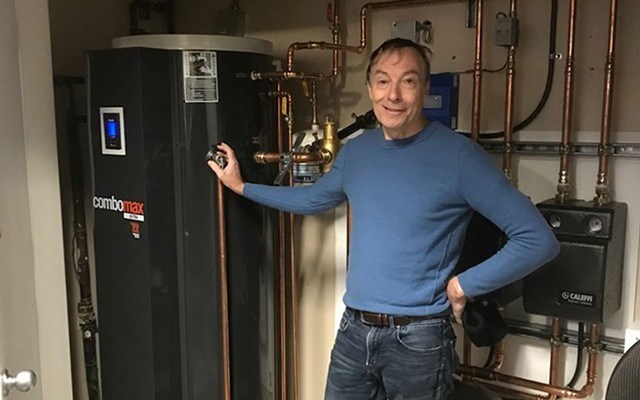 Tony Routley is one of eight Cheakamus Crossing homeowners who have disconnected or are in the process of disconnecting from the neighbourhood's controversial District Energy System. PHOTO SUBMITTED

In a 2012 white paper, The Regulation of District Energy Systems (DES) by The Pacific Institute for Climate Solutions, University of Victoria that reviewed both private and public district energy systems including Whistler's DES system, Resort Municipality of Whistler (RMOW) staff estimated that the cost of energy for heat-pump systems (hydro plus DES fees) would be about 84 per cent of the energy costs for electric baseboard hot-water heating (hydro only).

The capital cost of the 100-square-foot mechanical room for the heat-pump system in my townhouse at $300 per sq.ft. is approximately $30,000. Water heaters for electric baseboard hot-water heating systems can usually be installed in four square feet of closet space. At $30,000 per sq.ft. the capital cost would be approximately $1,200 for electric baseboard hot water heating; $28,800 more for the heat-pump system.

When capital and operating costs are analyzed, electric baseboard hot water heating is $58,800 less to install and $79/month less to operate than the heat-pump system.

In terms of [being] green, the DES white paper concluded, "to justify the development of DE systems solely on the basis of narrowly focused 'lower carbon emissions' is insufficient, particularly in BC with its low carbon electricity."

Whistler's zeal to be green at any cost appears to have pre-empted a process of due diligence that would have included, at the very least, a financial cost/benefit analysis.

The District Energy white paper states that systems regulated by political bodies do not offer the same level of customer protection, particularly when the regulator is also the system owner and has mandated a monopoly, or where the political body may not be adequately fulfilling its fiduciary responsibilities. (Unlike a water or sewer customer where almost all users are voting taxpayers, the small customer base of a municipal system wields minimal influence.)

Ultimately, Whistler's zeal to be green has manifested in affordable housing with a heating system that is unaffordable to operate and maintain thus placing an onerous financial burden on the very Whistler residents Whistler Housing Authority housing is supposed to help.