'House of cards' as WB struggles with lifts after storm 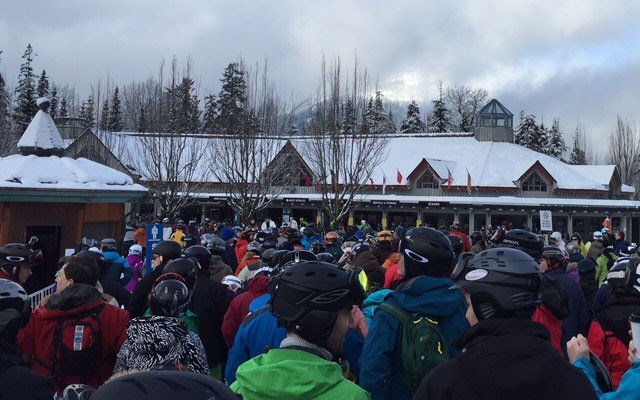 There was an eerie air of quiet calm as thousands of skiers and riders packed into the Skier's Plaza on Saturday Feb. 6, patiently waiting for the lifts to start loading so they could enjoy the biggest powder day of the season.

But just as Mother Nature had blessed the mountains with 60 centimetres of fresh snow in the alpine, she had also conspired against Whistler Blackcomb to ice up some of the mid-mountain lifts. In a separate issue, the village gondola also ran into problems mid-morning, backing up the lines from the valley even further, on the busy Family Day long weekend.

"The whole thing was like a house of cards. It all conspired against us," said Doug MacFarlane, WB's director of mountain operations.

"When everyone showed up on Saturday we'd just been coming out of this raging storm that had been going on for about 36 hours."

The storm began on Thursday, Feb. 4. WB is used to storms but the freezing levels on this particular storm cycle shifted from the valley floor up to almost 1,700 metres (below the Roundhouse and above Pig Alley) and back to the valley again.

"The grips were encased with snow during the storm," explained MacFarlane. "It got rained on and then froze again."

By Saturday morning a small army of workers, armed with rubber mallets, were knocking ice off chair lifts, among other things.

"That's the story that nobody gets to see because it's behind the scenes," said MacFarlane.

The village started filling up early with Fresh Tracks selling out. Thousands managed to get up into the alpine before the real problems began — Fitzsimmons was delayed, Garbanzo wasn't open and the Wizard on Blackcomb had the same problems.

At 8:45 a.m. the Mansour family — mom and dad and four kids aged 11 and younger — lined up at the Whistler Village Gondola. The Mansours were in Whistler for five days to make the most of the long weekend.

They waited in line for one hour and 45 minutes before loading into the gondola. And then the gondola stopped. A sensor had gone off and needed to be replaced."We were stopped for 10-15 minutes, and got updates from the Twitter account," said Mohamed Mansour via email. "It eventually started moving, but very slowly. We go to mid-station and everyone was asked to get off, and we were allowed to jump the queue for the gondolas up to the Roundhouse."

Almost two and a half hours after getting in line, they were finally able to ski.

"All in all, pretty painful," said Mansour. "But the staff were all as helpful as they could be, and the crowd was always calm and friendly. Oh, and the skiing was amazing once we were up there."

On Blackcomb it was much the same. Jonathan Aitken skied down to the Wizard from the Coast hotel. He was in the line up from 8:30 to 10:15 a.m.

And yet, much like on Whistler Mountain, the vibe was calm.

"The crowds were great," he said. "Everyone was happy and patient. They even got the wave going at one point."

Meanwhile, back in the village at 10:30, the problems were getting worse with the main access to Whistler Mountain now cut off (the lower part of the gondola was down for an hour and a half due to the sensor issue).

Beginner skiers were funnelled onto Fitzsimmons and the line-ups were unrelenting.

The gondola was not running again until noon.

By that time, however, Mansour and family were above the crowds, the morning now in the past.

"We ended up having a great day, so we didn't bother asking for one," he said, when asked if he wanted to be reimbursed.

WB has been fielding calls since.

"We're always trying to refine our systems and make it better," said MacFarlane. "If there's something to learn, we'll try to learn it."