Housing a hot topic at open house for bowling alley

Proponents looking at potential options to house staff
May 31, 2018 9:00 AM By: Braden Dupuis 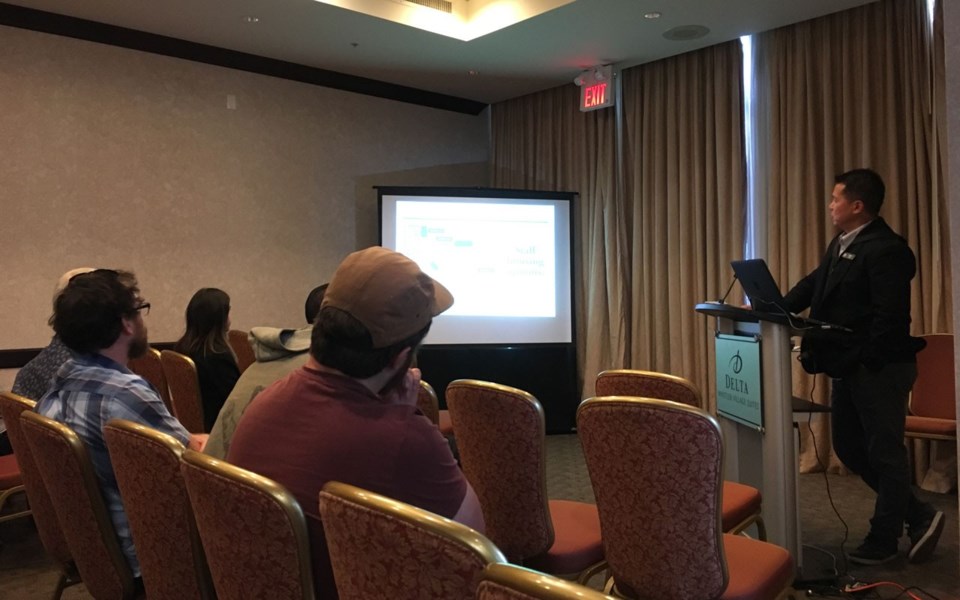 FOR THE SPARE Concorde Entertainment Group's chief financial officer Brian Lee talks about potential staff housing options for a new proposed bowling alley in Whistler Village at an open house on May 30. Photo By Braden Dupuis

About 40 people were on hand for an open house at the Delta Village Inn and Suites on May 30 to learn more about a proposed bowling alley and games facility in Whistler Village.

The application to the Resort Municipality of Whistler proposes a massive overhaul of the long-vacant property located at 4295 Blackcomb Way (formerly the AlpenRock House, which closed in 2002), including a restaurant, patio and lounge on the main level, and eight bowling lanes, billiards, ping-pong, foosball, skee-ball and basketball nets on the lower level.

The main comments posed to the proponents—National Beerhall Inc., a division of Calgary-based Concorde Entertainment Group—seemed to revolve around staff housing.

The proposal comes with an estimated peak staff requirement of 73.

"I've just been talking to people at this open house, and that is the issue that comes up—It's what are you going to do to try and house your staff?" said Concorde's chief financial officer Brian Lee.

"We are definitely going to look at whatever options we can to try and solve that."

One potential avenue Concorde is exploring is leasing some extra vacant space from strata landlord Larco Investments, with an eye to providing dormitory-style housing for staff, but at this point it's too early to say how many staffers might be housed in the vacant spaces.

"We were asked to look at some creative options, and I think this is maybe one of the things we're going to look at. We're not saying that this is going to be the only thing, but right now, at our stage of recently putting in an application, this is where we kind of are at right now," Lee said.

"I think that as we go forward we're going to potentially look at some other solutions, and hopefully be able to contribute to a problem that we know is going to face us, as it faces every other business in this jurisdiction."

The Concorde group has an extensive history in the hospitality industry in Calgary, where it operates 18 venues spanning 15 unique concepts (including four different National locations, the same concept planned for Whistler).

"We like to reference the kind of classic games in amusements and recreation," said Concorde's VP of operations John Molyneaux.

"What we've found (in Calgary) is that it's really resonating with the community, the corporate community and families ... we've got leagues that operate there year round, families celebrating birthday parties and so on and so forth with their kids."

The application is in regards to liquor licence hours and capacities for the new establishment, which requests capacities of 258 people under a food primary licence (183 on the main level and 75 on an outdoor patio) and 358 people under a liquor primary licence (69 on the main level and 289 in the downstairs games area). The proposal complies with the property's current zoning but will require covenant modifications, which will take it to a public hearing process.

The proposal is scheduled to come back to council on July 24, followed by a public hearing on August 14.