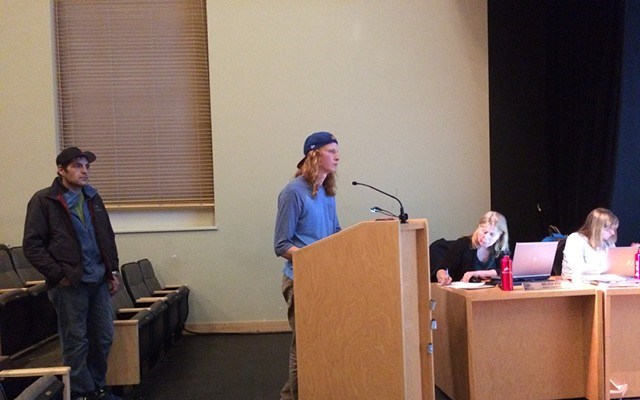 QUESTION PERIOD James Topp takes the podium at the Nov. 1 first council meeting, while Kyle Gottfried waits for his turn at the mic. photo by braden dupuis

With winter fast approaching and few housing options in sight, the commenters were out in full force for the latest meeting of Whistler council on Nov. 1.

About a dozen members of the public were in the audience prior to the meeting, and four people took the podium to ask questions related to housing.

Steve Andrews went first, asking what exactly the Mayor's Task Force on Resident Housing — announced last month and scheduled to meet for the first time on Nov. 7 — will accomplish that mayor and council can't already do itself.

"We thought it would be a great idea to bring together 16 people representing community members-at-large and stakeholders throughout the community to really focus on the issue and come up with some recommendations," Mayor Nancy Wilhelm-Morden replied.

The task force will include two members-at-large — Ben Smith and Terry Deutscher were chosen from 29 applicants — and Andrews asked if there was room for more.

James Topp was next, asking about what the RMOW is doing to stop illegal nightly rentals ("we currently have staff looking at that right now," the mayor said), and the potential for free transit service in the corridor for those who have been forced out of Whistler in recent weeks and months for lack of housing.

"That is something that our Transportation Advisory Group is looking at... regional transit between Whistler and Pemberton... and Squamish, but our primary goal is to house 75 per cent of our workforce here in Whistler," Wilhelm-Morden said. "We don't want people commuting, we want people who work here to live here."

Kyle Gottfried was next to take the podium, asking if the RMOW can use its much-touted $1.53 billion in GDP as leverage to get help with housing.

Wolfgang Lindemann was last to take the podium, asking questions about housing for the fourth consecutive council meeting.

Lindemann equated the housing crisis and the stress it has put on community members to a disaster, and wondered where the immediate relief is.

Lindemann asked if council and staff would immediately jump into action and put tents in Whistler Olympic Plaza, at The Point Artist-Run Centre, or anywhere else they'll fit.

"Can we call the Red Cross and get refugee tents? Because right now I feel like a refugee of Whistler, and I'm not alone," Lindemann said. "So I am asking for a call to immediate action. Not temporary housing, not housing we're going to build a year from now, but housing now. Now, now, now. Please."

Wilhelm-Morden was quick to shoot down the tents.

"No, Mr. Lindemann, we will not be putting up tents on the stage," she said ("That was an allegory," Lindemann replied).

"I would personally disagree with the characterization of it being a disaster, but whatever we call it we can agree that it's an issue," the mayor continued.

"As a response to that issue we have staff working on a number of issues... looking at enforcement with (Vacation Rentals by Owner), we've got the mayor's task force on housing, we've got the Whistler Housing Authority looking at some steps that they could take.

"Now, they're not going to provide immediate relief, but they will work towards a solution, so the issue has our attention, and we are working on it."

But what can we do about immediate relief? Lindemann asked.

"We don't have a response that will take effect tomorrow. We do not have that response," the mayor said.

Public Q & A takes place at the beginning of every council meeting. Council meetings past and present can be viewed online at www.whistler.ca/municipal-gov/council/watch-council-meetings.