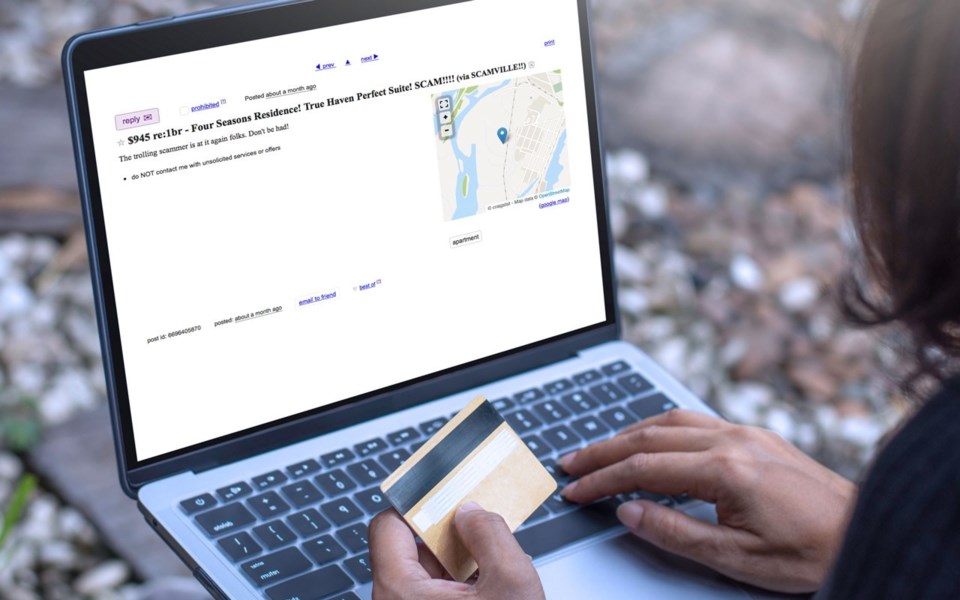 As another cohort of seasonal workers arrives in town ahead of the upcoming ski season, Whistler's housing crunch remains a major issue standing in their way.

After a few weeks spent sifting through the limited, unaffordable and unsatisfactory options posted online, one new arrival decided to create a post on Kijiji advertising himself as a potential tenant. But instead of resulting in a room for the season, the man said it cost him approximately $2,400, lost to an elaborate housing scam.

(Pique agreed to protect the man's identity out of concern for public backlash.)

He said he received a call back soon after posting the ad from a man who introduced himself as Frank and said he was looking for a housemate. Frank offered him a private room in Creekside for $850 a month.

The two had a long conversation throughout the day, the man recalled, adding that he even had a short video chat with Frank after expressing some initial hesitation. Frank then told the man he needed to make a down payment to him to secure the room in online Visa gift cards.

"It sounded a little bit odd, but considering my situation ... (and) since the dude seemed trustworthy, I kind of went along rather than sticking to my gut feeling," he explained.

He was also put in touch with someone purporting to be a real-estate agent representing the property, who said in a message she would send him a lease shortly.

The next morning, after finding what seemed to be a nicer place online and with no lease signed, the man decided to cancel on the Creekside room. But upon calling the real-estate agent through a number found on a website listed under her name, the agent said she didn't know who he was. That red flag prompted a call to Visa to cancel the gift cards.

"I got back in touch with this guy, and he said, 'Oh man, what are you doing, I lost the place because of you,'" he explained. "They played it out in a way that this was all a misunderstanding from my side, and after talking to this guy, about 50 times over the day, writing messages, he kind of convinced me that I was being a little bit rash and made a mistake ... For every doubt I expressed, there was a somewhat reasonable explanation from their side."

However, he eventually decided to bring the problem to the police, though he has yet to receive any updates on the case. (Local RCMP did not respond to requests for comment before press time).

The man said Visa has since confirmed all the cards he reported as fraudulent have been activated online, "So that makes it obvious that there is no misunderstanding, it was definitely a scam and I was dumb enough to fall for (it)," he said. "Visa might pay me back, if I'm lucky ... but this can take a few months."

Whistler resident Joseph Michael Kai-tsu Liu Roqueni may not have fallen prey to any scams, but that doesn't mean his house hunt has been any easier.

After suffering a broken femur while working as a photographer in February, Liu was forced to move out of staff accommodation. His current lease is set to expire at the end of November. After looking for accommodations throughout the summer, "I just gave up ... It's not human to pay that money for what they offer. I can't even afford it, but I'll do it if it's a nice place, but (they're not). With no job, there's no way I can do that," he said.

Liu's situation prompted him to think of some alternate solution for those in similar situations and one that would also have a positive impact on the resort's labour shortage.

He decided to look into starting up shuttle-bus service for employees commuting to Whistler from Squamish this winter. The service would make two trips each way daily, accommodating 24 people per bus.

"The idea is to have these buses available for locals so they can live in Squamish if they can't find anything in Whistler," he said.

Liu's current formula would require monthly passes at a cost of $390 per person. That's "way too expensive for an average employee," said Liu, who is hoping employers would help cover 50 per cent of the pass. So far that's too rich for most employers.

"I'm trying my best to get it going, but I think it's too late," he said. "Most of the companies already have everything arranged for this winter."