Hundreds gather in 'mass demonstration of love' for Sarah Prunier 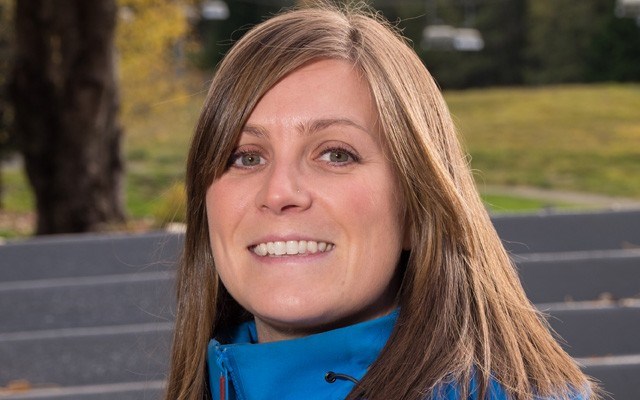 For Sarah Prunier, life was an invitation to adventure, and she always made sure to bring as many people as possible along for the ride.

And what a ride it was for the 33-year-old, who was remembered fondly by hundreds who packed in to the Fairmont Chateau Whistler last Thursday, March 24 to celebrate her young life.

Prunier died March 15 after falling into a tree well on Blackcomb Mountain.

"It means so much to us for you all to be here at such a massive demonstration of love," said Prunier's brother-in-law, Richard Horn, who made the trip from the U.K. "She had such a massive circle of friends and people who cared for her, so I really thank you for being here."

More than half a dozen people, from coworkers to employers, friends and family, took to the podium to share their memories of "Prunes," as she was affectionately known, often fighting back tears, but never without a smile too far behind.

Donna Kerr, general manager at Whistler Kids Snow School, where Prunier worked as a supervisor, remembered the England native as an inspiring presence who served as a mentor to countless instructors over the years.

"Sarah continually worked towards making the day as easy as she could for her staff. She cared about who they were, more than just instructors," she said. "She helped them with their skiing, she helped them with their training. She worked on training modules that would keep us as leaders in the ski industry. Sarah wanted what was best for her staff, the kids who came through the program and her coworkers."

Inherently ambitious, Prunier was constantly seeking the next challenge, whether she was backpacking through Africa, getting her degree in sports science, or lining up for her first Ironman.

It was during that event in 2014 when she refused to let even the gruelling demands of a triathlon dampen her indomitable spirit, remembered Paul Shimizu, Prunier's boss at the Whistler Golf Club, where she spent five summers in the retail shop.

Partway though the run portion of the race, Shimizu decided he would ride alongside Prunier on his bike to offer her some support.

"I asked her how she was doing and expected, 'I'm doing pretty good,' or 'I'm pretty tired.' Instead I got, 'I'M DOING GREAT! I'M HAVING THE TIME OF MY LIFE!'" he said, eliciting a roar of laughter from the audience. "As I rode behind her, she began talking in earnest to me. She had so much to say. She told me about the swim portion and how she'd swallowed seven mouthfuls of water from Alta Lake and was waterlogged. She told me how windy the ride portion was and she and some other competitors had to be doused with ice before starting their run in order to lower their core temperatures. That sure sounds like Sarah's cup of fun."

Prunier's unbridled enthusiasm for whatever she set her mind to also had a way of wearing off on those closest to her. In August 2015, she made sure to schedule her dream Whistler wedding for the weekend after Ironman so she could still take part. Even though injury kept her on the sidelines, it didn't stop her from inspiring Horn, an admitted non-athlete, to compete. She walked him through the course, offering tips on tricky sections. She assembled a group of supporters to cheer him on.

"She had so much more faith in me than I had in myself," said Horn, who struggled through the run course, fighting back nausea. "She must've known something was wrong when I hadn't hit the halfway point, and she came out to find me. She carried me spiritually. She must have walked and jogged half the marathon to keep me going.

"She saved me. She was so strong, so big-hearted."

No reflection on Prunier's life would be complete without mentioning the love of her life, her husband Tyler Hunter. The couple "complemented each other beautifully," both naturally taking to the mountain life they had created for themselves.

"What stood out for me was they chose a lifestyle that pursued happiness," Jay Stevenson, a longtime friend of Hunter's, said of the couple. "It focused on true friendships and personal growth. These are very good people."

That fact was evidenced in the deep connections Prunier forged; whether you were an old friend or a relative stranger, she had a way of making anyone she met feel at ease.

"The minute you meet Sarah, you love her," said Sandy Hunter, Tyler's mother. "You feel you had known her forever. She walked in my house the first time and I felt like she had always been there, like an old neighbour."

More than 400 people packed into the hotel's Frontenac Ballroom to pay their respects last week. But, as Prunier's uncle-in-law Murray reminded the crowd, this wasn't a time to look back.

"Now as Tyler lives his life forward and as the rest of you who worked with Sarah and know her qualities live your lives forward, you will experience loneliness, sadness and doubt," he said. "However, as Sarah and Tyler's Whistler family, you people all have a collective responsibility to hold Sarah's memory dear in your heart, and from what I've heard tonight, I know that will happen."

A GoFundMe campaign has been set up to support Hunter at this difficult time at www.gofundme.com/qev9yvgc.