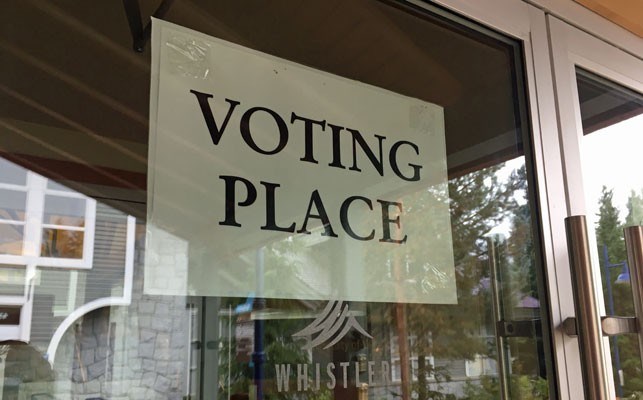 voting day Hundreds of Whistlerites have already voted in advance polls for the upcoming byelection. General voting day is Saturday, Oct. 28 at the Whistler Conference Centre. PHOTO by braden dupuis

Whistlerites will head to the polls this Saturday, Oct. 28 to elect a new councillor, but hundreds have already had their say at advance polls.

On Oct. 18, 158 people cast a ballot at the Whistler Conference Centre, while another 227 voted at Municipal Hall on Oct. 21 for a total of 385 ballots already cast.

General voting is open from 8 a.m. to 8 p.m. on Oct. 28 at the Whistler Conference Centre.

The elected councillor will serve a one-year term before a full municipal election in October 2018.

"We've only got one year left, and there are things that we want to get done — particularly on the housing and transportation front," said Mayor Nancy Wilhelm-Morden, of what she'd like to see from the new council member.

"So I am very hopeful that the new person coming in will be well informed and willing to work with the team so that we can get the things done that we need to get done."

Whoever wins the election will have their work cut out for them, said Councillor Jen Ford, as it took her a year before she felt fully up to speed in the role.

"There are a lot of processes to understand, so what I would hope is that someone comes in with a positive attitude, an open way of communicating, that they're willing to learn quickly and ask questions along the way," Ford said.

"Like any election, I think it's an opportunity to shake things up a little."

Coun. Sue Maxwell said she hopes the new addition brings fresh ideas, a fresh perspective and a willingness to cooperate.

"If one person did want to radically shift our direction I think that would be a challenge, because we have already sort of agreed on a bit of a path that we're following," she said.

"I think it would be very hard for one person to radically shift it, but one person can certainly influence it."

"You want to have somebody sitting there that's got a good head on their shoulders and can absorb quickly, and contribute quickly, because you don't have that six months or a year learning curve," he said.

"Now maybe somebody is interested in running again (in 2018), so it's a learning possibility for a future four-year term, but it would be nice just to keep moving along so that we can get things done in 2018."