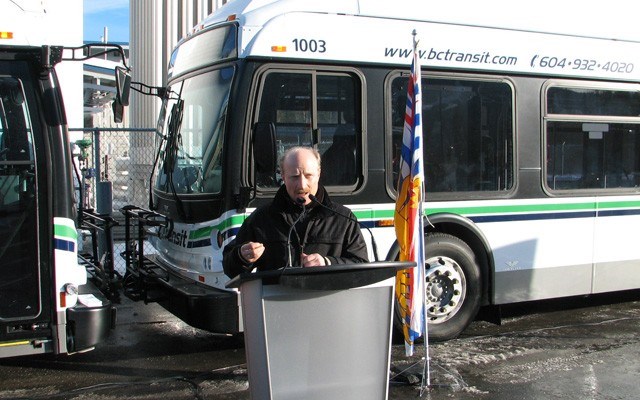 hydrogen hype Whistler's much touted hydrogen bus fleet was brought in ahead of the 2010 Olympics only to be scrapped in 2014. Former Mayor Ken Melamed is pictured announcing the project in 2006. file PHOTO

That's the message from a recent study out of Simon Fraser University (SFU), the University of California, Davis and Canadian consulting firm Navius Research that found that despite all the attention surrounding alternative fuels over the years, they have largely failed to take hold in the transportation market.

"It's the media and the politicians that have this urge, this culture to hype things — and they have reasons to do it," said UC David researcher Daniel Sperling "You understand the media motivation, the politicians are similar: They're not very knowledgeable, they're generalists, so some good idea comes along and it's something to talk about, it's something hopeful. Part of it is human beings are optimists by nature, most of us."

The study, published in the online journal Nature Energy, examined 30 years of media attention on alternative fuel vehicles (AFV), with each breathlessly touted as the next big thing to replace gasoline-powered cars, and compared it to research and development funding from the US Department of Energy, as well as prototype development by the world's largest auto manufacturers. But no matter the technology — whether electric or hydrogen, flex fuel or methanol — none have been able to quite live up to the hype.

"If there's too much hype or it's overpromising, that being the positive valuation statements of the new technology, if they're so positive that the technology can't possibly deliver in (the expected) timeline, then the research shows that that leads to more severe disappointment into the cycle," noted Jonn Axsen with SFU's School of Resource and Environmental Management.

That is to say nothing of the effectiveness and benefits associated with AFVs themselves. In fact, researchers acknowledged a full transition to alternative fuel vehicles is needed if we have any hope of reducing carbon emissions 80 per cent by 2050, the target required to limit a worldwide temperature rise to just two degrees Celsius. The challenge, Sperling explained, is to "manage (the hype) so that we don't start acting foolish or wasting money or resources."

The latter problem is a political one as much as anything else. Axsen believes it's too easy for elected leaders to curry favour with voters by jumping on the bandwagon of the latest fuel de jour without fully understanding its long-term scientific and environmental implications.

"It all gets a little too politicized," he said. "We've had enough hype and disappointment cycles, what we really need is momentum."

It's something he believes Whistler's since scrapped hydrogen bus fleet fell victim to as well.

"Whenever I'm talking to someone locally in British Columbia (about this study), the first thing they often say is, 'Oh, you mean like the buses in Whistler,'" he said, referring to BC Transit's much-touted $90-million fleet of 20 hydrogen buses that was announced to much fanfare ahead of the 2010 Olympics before being decommissioned in 2014 due to rising maintenance and fuel costs. "It's well known that that (project) came and went and (fell into) that hype pattern."

Whistler councillor and Resort Cabs founder Jack Crompton said, while he's not surprised the move away from petroleum "hasn't been a smooth one at all," he believes the transportation industry needs to be able to take risks that ultimately inform legislators.

"Innovators fail before they succeed, and I think taking informed risks is part of running a company that succeeds in the long run," he said. "I think communities want to see their governments be careful and learn from the risks that are being made by innovators in the private sector."

According to the study's researchers, for AFVs to gain a secure foothold in the marketplace, a longer view must be taken.

"It would be ideal to have that built right into government, ideally nationally as well as in British Columbia," Axsen said. "The B.C. government, for example, has lots of bright people working on policy design but they don't really have enough funds to study all the (alternative fuel) technologies and do the research that needs to be done. Because they have to work with the funds they have and what projects they have at the time, they're happy to shift focus every time the hype shifts as well."

One possible solution the study posited was implementing an assessment body that would review different AFV technologies and ultimately provide policy recommendations, similar to California's Air Resources Board.

"It's a very unique institution," Axsen said. "They have a good solid chunk of funds, they have power to put environmental policy into play and they also regularly do technology assessments."

To view the study, visit www.nature.com/articles/nenergy201613.