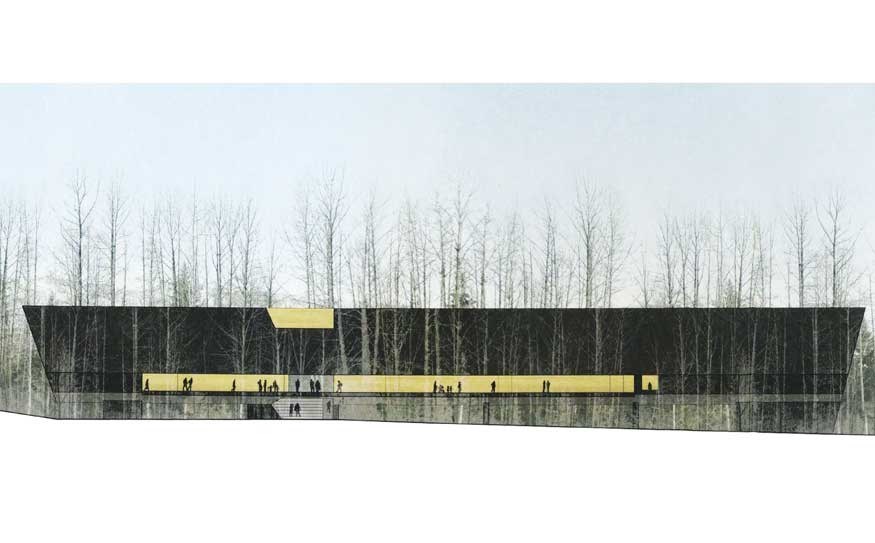 Public response to the Audain Art Museum's design was found to be overwhelmingly positive at an open house presentation by its design team at Millennium Place on Wednesday, Jan. 30.

Whistlerites had a chance to look at a model and drawings of the building after John Patkau of Vancouver's Patkau Architects offered a brief overview of the plans.

The long three-storey building looks rectangular from the approach, but its side view shows a steep A-line roof slope that makes up the majority of the building's shape in order to facilitate snow sliding from the building in the winter.

The main entry to the building will come from a ramp and bridge located on Blackcomb Way, which will take visitors to the art museum's entry porch located within the building.

"It will be a beautiful building and a wonderful asset," said Joe Redmond, after the presentation.

"It's sensitive to the landscape. It's an iconic building. It's something that will sit in the landscape and be quite remarkable," said Michael Audain's grandson, Cameron Sutherland, who has grown up with his grandfather's extensive collection of art.

"It's kind of like a long house, in a way," Sutherland said. "Everything sounds great... I've grown up with it (the art), so it's great he's going to be able to share that with everyone else too."

"I think what I like most about it is that it's so responsive to the site," she said. "It's going to be an iconic building, not in 'wow' architecture, but iconic in that it's going to settle into the landscape beautifully."

Susan Smith echoed that sentiment while looking over the model.

"I like the smooth, clean lines and the simplicity of it," she said. "It's a very different shape and size from most of the art museums I've seen."

The open house collected commentary from the public ahead of the Resort Municipality of Whistler's rezoning of the land between parking day lots 3 and 4 to allow for a museum.

Earlier in the day, representatives of the Audain Foundation board and Patkau's architect team behind the Audain Art Museum made the first review presentation of their vision for the building to the eight-man Whistler Advisory Design Panel.

The building will be 39,000 sq. ft. in total size over two floors, with gallery space taking up 13,300 sq. ft., making it a third the size of the Vancouver Art Gallery, said Patkau.

The main floor would house gallery space, a shop, and bathrooms, while the upper floors will house a boardroom, administration, and a caretaker's condo space to allow someone to live at the facility full time.

Twenty-five per cent of the gallery space would be for temporary exhibitions, of which presenters hoped there would be two each year, with changeovers of the exhibits taking place during the spring and fall shoulder seasons.

The remainder of the art museum's gallery space would be for the permanent exhibitions of the Audain collection, which could also be rotated thanks to the sheer number of objects gathered over the years by the Audains.

No details were given as to the actual art going on display, but Patkau said the permanent galleries would be set up historically, moving from the Audain's First Nations art collection to the "avant garde."

Patkau said they wanted the building and site to become an important point of connection between Whistler Village and the Upper Village, with better-defined trails between the two locations coming through the property.

The site, facing the village in one direction and the forest and Fitzsimmons Creek in the opposite, would combine the community and the wilderness, said project landscape architect Chris Scope.

Because of the angling of the building in a clearing on the space, only one or two trees will need to be removed during construction. The building itself is elevated because of its location on a flood plain, he added, but creates a space for use beneath it.

The clearing will be set up as a meadow with a sculpture park; sculptures will also be located in the surrounding forest. The works, Patkau explained, are to be newly commissioned sculptures with the outdoor collection being built up over time.

"This is a significant institution and will have a remarkable collection on display within," Patkau said. "The site is really ideal. It completes and connects what is the museum and library with the Whistler Olympic Park and the Squamish-Lil'wat Cultural Centre..."

The building exterior will be clad in a dark envelope, possibly metallic, with the interior being covered in warm woods, Patkau said. The effect, when the interior is lit, would be like a shining lantern in the forest. The dark building would blend into the forest during the day.

Following the presentation, the members of the Whistler Advisory Design Panel gave their impressions.

Panel member Paval Grabowski echoed his colleagues with his comment, "It's an awesome building, I like it a lot."

The main criticisms outlined included the need to ensure snowload shed from the steep roof fell away from public areas, security in the space and on the grounds, and the use of the open space beneath the building.

Crossland Doak, who chaired the panel for the presentation, described the building as an "art ark."

"I hear a lot of positive comments... which is generally supportive of the direction it is taking," he told Patkau and his team.

The next presentation by the design team to the Whistler Advisory Design Panel is due to take place in March, with the hope of a quick pace for the project meaning that ground can be broken for its construction in 2013.

The plans for the art museum had been developed in just two-and-a-half months, Patkau said.

"We have a highly ambitious schedule," he added.