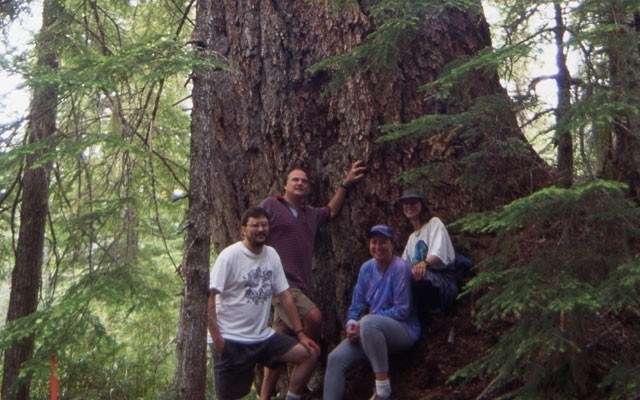 GENTLE GIANT The Elaho Giant in 1995 shortly after it was discovered by members of the Wilderness Committee, pictured. Photo submitted

Last week, with rumours of its demise in a massive wildfire last summer, Buchanan decided to make the difficult trek through challenging terrain to reacquaint himself with the colossal tree.

"I guess it was just like going out to visit an old friend to see how it was doing," he said.

Unfortunately, Buchanan's visit confirmed his worst fears: The Elaho Giant is dead. Although firefighters did their best to protect the tree from the 700-hectare blaze, video Buchanan shot last week showed a blackened trunk and barren branches.

"When I got there, my first impression was that the fire went really deep into the forest floor," he explained. "I just stuck my hand in and 12 inches was probably solid ash. I'm thinking the fire smouldered underground for a long time, which was probably what did the Elaho Giant in."

One of the widest Douglas firs on record, the Elaho Giant was first discovered by the Wilderness Committee in the 1990s during a campaign opposing a road planned for the valley. Estimated at over 1,000 years in age, the Giant became a symbol for local activists waging protests against old-growth logging in the area.

"The discovery of that tree helped to bring global attention to our campaign to see the Upper Elaho protected," explained Joe Foy, the Wilderness Committee's national campaign director. "We weren't able to stop the logging roads in time to go past the Elaho Giant, but we were able to eventually, with the Squamish Nation and others, succeed in getting a fairly large portion of the Elaho (Valley) protected."

Foy said a considerable number of ancient trees managed to survive last summer's lightning-caused wildfire because they were shielded by large swaths of protected forest — unlike the Giant.

"It's upsetting to me because when we discovered the Elaho Giant it was in that wilderness setting, but because of the logging-road building and logging around it, it ended up in a small patch of forest, which I think made it more vulnerable," Foy said.

Beyond its massive size, the most notable thing about the Giant, according to Whistler ecologist Bob Brett, was the fact that it avoided being logged for so long.

"The fact that it wasn't logged was a success for the people who think that in this case big, but also very old trees are valuable for more than just their wood," he said.

"It's the uniqueness of the combination of it being that old but also not being logged; it's very unusual for British Columbia."

Foy said the Elaho Giant should be a stark reminder of the impacts of logging and the vital need to protect our old forest.

"Now, with the added massive pressure of a rapidly changing climate, it's in my view even more important than ever to protect Earth's few remaining wild places," he said.

"I'm worried about where we live and I'm worried about everywhere facing these pressures. Anyone reading the news knows that we live in very dangerous times (for wilderness habitat) and I think the story of the Elaho Giant is part of those times."