Suspected homicide would be second in Whistler in recent decades
Jan 20, 2015 1:15 AM By: Alison Taylor 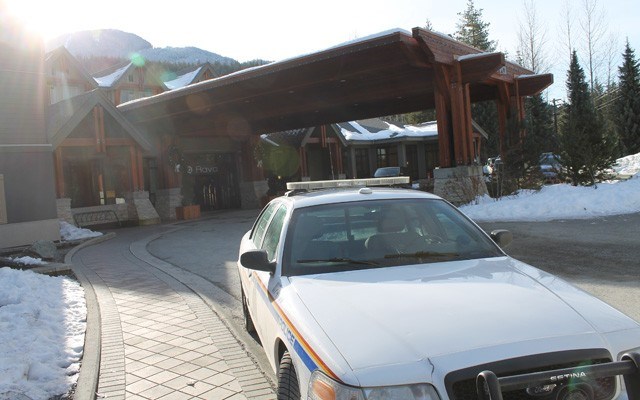 UNDER INVESTIGATION Homicide investigators are on the scene at Aava Hotel after a man died following an altercation early Tuesday, Jan. 20. Photo by Brandon Barrett

A man is dead after an altercation in a Whistler hotel and homicide investigators are now looking into the death.

Whistler RCMP was called to the Aava Hotel just after 3 a.m. on Tuesday, Jan. 20.

According to a police press release: "This was not a targeted attack, however, there is no risk to the public in relation to this incident."

The victim's identity has not been released and it is not known if a suspect is in custody at this time.

A spokesperson for the hotel referred comment to police.

A parallel investigation is also being led by the Independent Investigations Office of B.C. (IIOBC), a civilian body that is mandated to conduct investigations into officer-related incidents of death.

When RCMP members arrived on the scene, the male victim was found unresponsive and in medical distress when CPR was administered. The man was later pronounced dead at hospital.

"Given the attendance of police this set of circumstances warranted IIOBC notification," read an IIOBC press release.

"In this case, IIO investigators will be working to establish if there was a nexus (or relationship) between the death and an officer’s actions. If such a nexus is established, the IIO will sustain jurisdiction," a second release stated.

IHIT media relations officer Sgt. Stephanie Ashton pointed to the civilian investigation as a reason why so few details have been released at this point.

"We’re in the situation where IHIT is working with IIO, so certain steps need to be taken before we can reveal much about what’s going on and we’re trying to get through those steps," she explained. "Once they’ve done that, I should be able to get some updates from our team leader."

Ashton added that a press conference is expected for Tuesday afternoon or Wednesday morning.

This is Whistler's second homicide in decades.

In March 2007 Michael Boutros, 26, was killed in the village when a fight broke out after the nightclubs closed.

An RCMP dog team that was in the village witnessed the incident and Shane Richard was captured while attempting to flee the scene.

Richard was found guilty of second degree murder, and sentenced to life with no eligibility for parole for 16 years.

Stay tuned to Pique for more.

With files from Brandon Barrett.