I'm right and you're an idiot 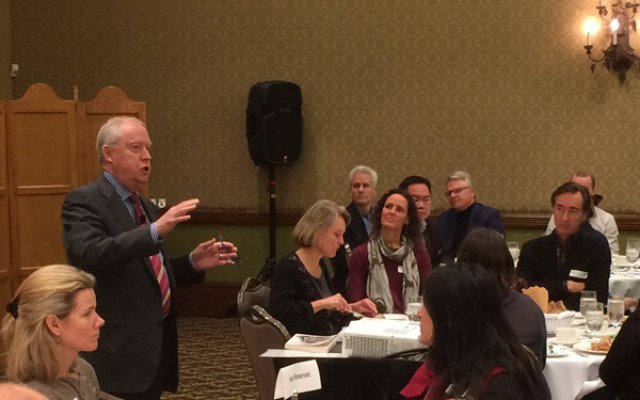 James Hoggan's newest book, I'm Right and You're an Idiot: The Toxic State of Public Discourse and How to Clean it Up, was born out of embarrassment.

Hoggan had only recently joined the board of the David Suzuki Foundation when the environmentalist icon caught him off guard with a question.

"Why aren't people in the streets about climate change and about what we're doing to our oceans, and the way we're destroying the world around us?... What does it take to convince people we need to command that our leaders change the way that we regulate our interaction with the environment?" Hoggan recalled being asked, while speaking at a Whistler Chamber of Commerce luncheon on Oct. 26.

"I was a little embarrassed, because I got the sense from Suzuki that that was the reason I was asked onto the board... so this book was born in kind of a sense of embarrassment."

In I'm Right, Hoggan — a longtime PR pro, author and now chair of the Suzuki foundation — argues that the most pressing environmental threat today is not climate change itself, but the resistance to change that results from a calculated "pollution of the public square."

Actors on the right or left have effectively muddied the waters of information, making it harder than ever for opposing sides to reach a consensus.

"We live in a specialized society where most people don't know that much about most things... what human beings are really, really good at is trying to figure out who knows what they're talking about," Hoggan said.

Most of us not being scientific experts, we rely on trusted sources for our specialized information — otherwise known as "trust networks."

"And today around things like climate change, gun control, you could add immigration, national security, these trust networks are being corrupted, so that people on the right or people on the left, depending on whose trust network is corrupted, are not able to kind of converge with people that they disagree with on a whole bunch of values, in the normal way that they do," Hoggan said.

"Everyone is biased, everyone is just in it for themselves, nobody is actually in it for the public good, those environmentalists are just radicals. They're un-Canadian."

At the end of an interview with the Dalai Lama, Hoggan asked him for advice.

"He put his finger on my forehead, and he said, 'We like to think the Western mind is more sophisticated, but in Tibet we go by the heart,'" Hoggan shared.

"And I think that's strong. And so maybe if we take the Western mind and the Tibetan heart, and we fold them together, we can start to fix these problems."

In these highly polarized times, where people tend to take a "war-like" approach to disagreements, finding common ground is especially crucial.

"People don't trust government, they don't trust business, and they wonder about each other, and in that kind of environment, the rules of communication are totally different," Hoggan said.

"Facts are not enough to change minds. We need to figure out ways to connect with each other on a whole range of issues, whether you're concerned about the environment or you're concerned about other issues... I think the starting point for me is just making the assumption that people who disagree with you are well intentioned.

"Communication is better when we leave space for the people who we are speaking to to come into the narrative. They may have different heroes and different plots and different outcomes than you do in your stories, but you want to be aware of their story, so that you can tell your story in a way that's not unnecessarily harmful."