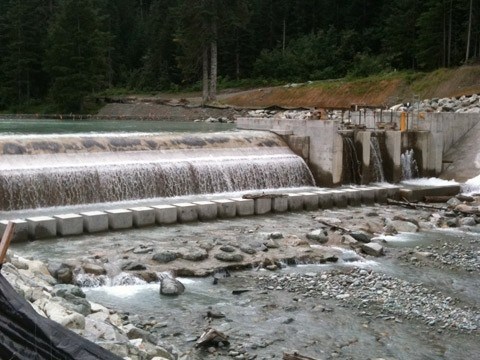 A renewable energy giant with big assets in B.C. just got bigger with the $185 million purchase of a company that owns run-of-river projects in Douglas First Nation territory.

Innergex, a clean energy developer based out of Montreal with assets in the Sea to Sky region, announced in a news release on Tuesday that it has come to an agreement with the shareholders of Cloudworks Energy Inc. to purchase all their outstanding shares.

Innergex plans to issue the offering in what are called "subscription receipts," which are basically certificates that entitle the holder to a share in a company. The receipts can be traded on a one-for-one basis for common shares of Innergex, which is traded under the symbol "INE" on the Toronto Stock Exchange (TSX).

Each subscription receipt will be issued at $9.35 and Innergex plans to issue 16,100,000 of them. The energy company expects to raise $150 million from the sale but the banks working to sell the shares have an over-allotment option that will allow them to pick up receipts beyond the ones that Innergex is issuing to the public.

If the banks exercise that option, the company will raise $156 million in the public offering. The offering is expected to close on or around March 4.

Cloudworks operates six run-of-river facilities near the north end of Harrison Lake in the traditional territory of the Douglas First Nation. The projects generate electricity by diverting part of the flow of a river through a tunnel that turns turbines on a generator on the other side.

The Harrison facilities have a total cumulative capacity of 150 MW and produce 594 GWh of energy each year, according to the news release. The projects generate a maximum amount of approximately $6 million a year.

Cloudworks owns 50.01 per cent of these projects and the remaining portion is owned indirectly by Connor Clark and Lunn Infrastructure, a Toronto-based company that invests in infrastructure projects, as well as Fengate Capital Management, an investment management firm also based out of Toronto.

Innergex, meanwhile, has other major assets in the Sea to Sky region. Through a partnership with Ledcor it owns a major stake in a run-of-river project on the Ashlu River in Squamish and is currently working to develop three run-of-river projects on the Lillooet River in what's known as the Upper Lillooet cluster.