Hereditary chief went on record with Courier in August about impaired and speeding charges
Sep 20, 2018 11:00 AM By: Mike Howell / Vancouver Courier 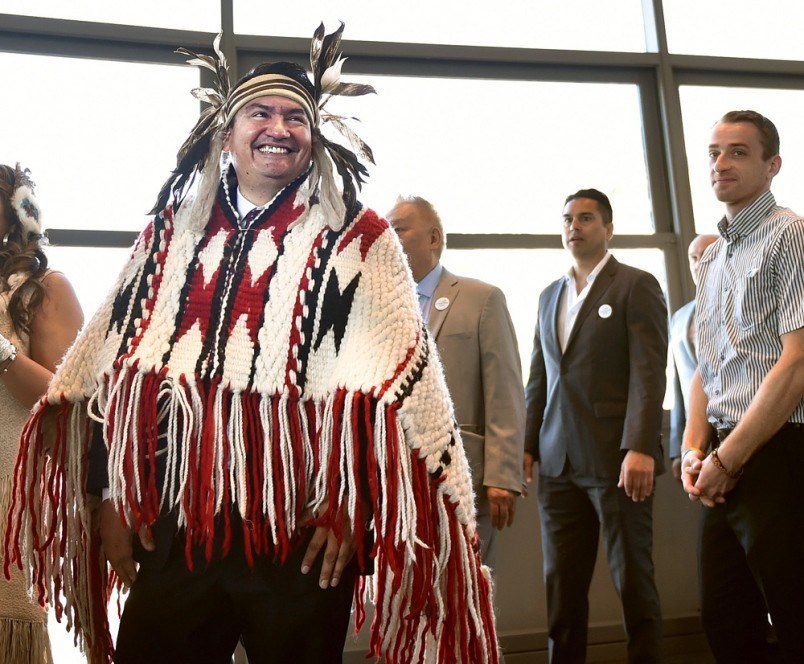 NOT RUNNING Ian Campbell, was to lead Vision Vancouver in the Oct. 20 civic election, withdrew Sept. 10 from the race to become the city's next mayor. This photograph was taken at his launch in May. Photo by Dan Toulgoet

So what happened to Ian Campbell's mayoral run?

For four months, he had his sights set on becoming Vancouver's next mayor.

He held a big launch in May, promoted his Indigenous ancestry as a hereditary chief of the Squamish Nation and talked about being a "unifier, a bridge builder to offer a new and better path forward."

Campbell offered an impressive resume - a band councillor, his nation's cultural ambassador and negotiator for the intergovernmental relations department, board member of the MST Development Corporation and a history of protecting and enhancing the Aboriginal rights and title of the Squamish Nation.

He was involved in ensuring his nation participated in the 2010 Winter Olympics. He has an MBA from Simon Fraser University. In December 2015, he presented Prime Minister Justin Trudeau with a model-sized canoe as he entered Vancouver city hall to symbolize Campbell's hope for all people to paddle together.

That was the Ian Campbell the public knew.

Then, in a sudden turn Sept. 10, his ambitious run for the mayor's chair went off course when he announced he was withdrawing from the race, leaving Vision Vancouver without a mayoral candidate and the public unclear about the reason for his departure.

Details began to unravel in August

As of Thursday, Campbell had not returned messages to the Courier to elaborate on his vague reasons for halting his run. In a widely circulated emailed statement to media, he said he made his decision after "reflecting on the political landscape and my complicated personal journey."

At the time, Campbell wasn't faring well in public opinion polls, although his party later said internal polling showed he was "neck and neck" with the NPA's Ken Sim.

Details began to unravel in August when various media and civic political parties were sent photocopies of court documents from an anonymous person that showed Campbell faced a speeding charge in Vancouver in October 2006 and impaired charges in North Vancouver in December 2006.

Despite the widespread circulation of the information, news never broke of Campbell's court history. The Courier made an editorial decision not to publish details, based on the date of the offences. The Courier, however, did interview Campbell Aug. 8 on the record to get his response to the charges.

This week, with news breaking in StarMetro that Campbell faced an assault charge in February 2010 against a woman who is now his fiancé, the Courier has decided to publish some of Campbell's comments from the interview in August.

Campbell made no mention of the assault charge during the interview but did discuss another incident in which he was involved in an accident after consuming alcohol. The assault charge was stayed in May 2010, according to court documents obtained from the provincial courthouse in North Vancouver.

The Courier contacted Vision Vancouver Coun. Andrea Reimer, who was co-chair of Campbell's leadership campaign, to learn more about Campbell's departure but she referred questions to the party. Ginger Gosnell-Myers, who was deputy campaign manager, said in an email that "it was not an easy decision to make, I am heartbroken about it, but also proud of what we were trying to accomplish and what we were able to do to date."

Ange Valentini, executive director and campaign director of Vision Vancouver, said the party knew about the speeding and impaired offences but wasn't aware of the assault charge until Sept. 6 when Campbell was asked about it by a GlobalNews/CKNW reporter.

No story was immediately broadcast following the interview.

Vision Vancouver spent the weekend of Sept. 8 and 9 seeking more information on the charge. On Sept. 10, Campbell withdrew from the race. Valentini would not provide more detail on Campbell's "complicated personal journey," or say definitively whether the chief's court history was directly related to his departure.

The Courier requested to speak to the Crown prosecutor who stayed the assault charge but was referred to B.C. Prosecution Service spokesperson Dan McLaughlin. McLaughlin said in an email that the Courier would have to file a request under the Freedom of Information and Protection of Privacy Act to learn why the charge was stayed.

Interview with the Courier

In his interview with the Courier in August, Campbell acknowledged he was penalized with a $500 fine for the impaired charge and given a three-month driving prohibition. He said he paid a fine for the speeding charge and met with the officer who pulled him over in his Camaro along West King Edward and apologized for his actions.

"I know I met with the officer and had a talk and took ownership and said, 'Yes, I was driving over the speed limit,'" he said, noting he eventually traded his Camaro for the Dodge Ram truck he drove on the night he was arrested for being impaired.

He said he was also convicted of a drinking-and-driving charge when he was 19 after he smashed his vehicle into a divider after leaving a gas station at 12th and Clark Drive. When asked whether he had other convictions, or there was anything else he wanted to disclose that may or may not surface during the campaign, he said "there's no other convictions, no."

His explanation for the impaired charge from December 2006:

"Back in December 2006, I did attend a Squamish Nation staff party at the Chief Joe Mathias centre down in Capilano [reserve]. Unfortunately, I did make the mistake of getting behind the wheel and driving my vehicle across the street to my sister's house, where the West Vancouver police did question me. I was trying to tease the officer, but he didn't take it very lightly. I was just trying to minimize the situation by saying I just want to park my vehicle here, I apologize and wanted to sort of get out of this situation. He ended up pursuing whether or not I was drinking and driving. And when I was trying to talk to the officer, the officer became a little irritated with me and then wanted to charge me with a refusal to blow, I believe."

He said the incident occurred around the time he had just separated from his wife.

"I didn't drink 10 years prior to that. I was clean and sober and very much involved in culture and spirituality. Then when I separated, I chose to go in a different direction, and that was to drink alcohol. And that's where I made the poor choice of getting behind the wheel. Immediately after that, it did open my eyes to the fact that I had a lot at stake here and I didn't want to be a person that was going to create shame for myself. I wanted to then go into counselling, so I sought counselling, I sought professional development programs."

Campbell said the Vision committee vetting him to be the party's mayoral candidate knew about the charges, saying, "Yes, I wanted to be forthright right from the get-go with the committee that was doing the screening and make sure that we identify issues that can be questioned."

His response to how the public might respond to the charges:

"I think it's important to look at my leadership skills and the track record, and that this is a part of the fabric of my journey and my growth and my truth - and that I've taken measures to take it very seriously, and to correct my actions and to learn from them and to seek help. I think it's made me a stronger leader, it's made a better person. For someone who has been through the fire to get to the other side, I know what it means to be uncomfortable, and I know what it means to take direct action to affect positive change and to turn things around on a personal basis and in our community."

Asked whether he believed the charges would hurt his chances at the polls, Campbell said, "[The] main thing for me is I don't want to see this as something that defines me. This record is public, it's been public for many years. I faced it many times, and believe that it's important for me to tell that story so others can learn and grow from it as well - and inspire young people to do better, and to learn that each generation can in fact grow and do better."

The final question to Campbell was whether he thought the anonymous source who sent the court information to media and political parties simply didn't want him to become mayor, or that the person didn't want a First Nations person to become mayor.

"Because they're anonymous, I can't begin to speculate on a motive - whether it's racial, or whether it's to try and damage my ability to govern. I only wish them well. I'm willing and ready to step forward. I can only wish others well. I think the people of Vancouver deserve a leader who's honest and who has been through difficult situations and has come out on the other side as a stronger person, and I believe I'm that person."

With Campbell's departure, it marks the first time in Vision Vancouver's history that it will not run a mayoral candidate in an election. Campbell, meanwhile, is engaged to the woman he was alleged to have assaulted. They were together at the launch of his campaign in May at the Waterview events centre, under the Granville Bridge.