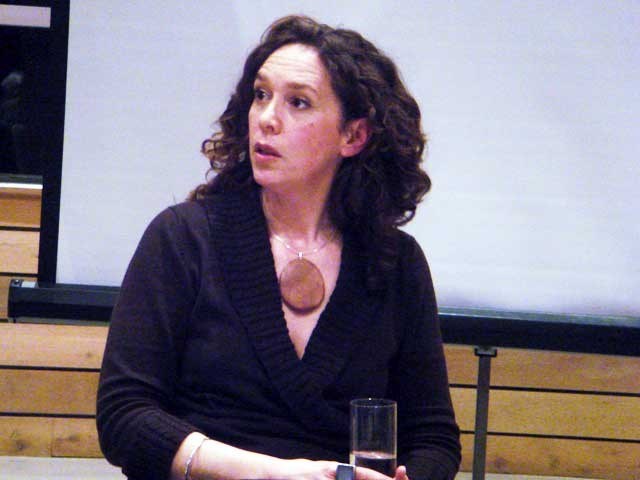 A prominent B.C. environmentalist struck a conciliatory tone with green energy critics in Whistler April 9, saying that blanket opposition to independent power producers (IPPs) is based in ideology, not pragmatism.

Tzeporah Berman, a co-founder of ForestEthics B.C. and now executive director of the PowerUp Canada citizens' initiative, led a discussion last Thursday put on by the Whistler Forum for Leadership and Dialogue in which she outlined B.C.'s energy needs and addressed the "backlash" against the government's attempted solutions.

Whistler community members initially thought the discussion would turn into a heated debate about IPPs, but Whistler Forum president William Roberts tried to steer discussion towards green energy as a whole.

Proponents of IPPs feel they're essential to meeting B.C.'s energy needs. Opponents, meanwhile, feel there's a "gold rush" on for B.C. rivers, to develop run of river hydro projects on them, and that such projects amount to privatizing provincial streams.

Despite Roberts's call, Berman focused much of her discussion on the IPP debate, which has heated up as the May 12 provincial election approaches. She didn't mince words when addressing them.

"I think that the call for a moratorium on IPPs is shortsighted," she said. "We're in a recession and calling for a moratorium of the private sector, of renewable energy companies would send the signal to the business community that this is not a place for them to invest in."

In the midst of her talk that preceded a discussion with various community members, Berman had a Powerpoint presentation in which she articulated B.C.'s energy needs leading up to 2030.

She explained that B.C. is currently getting approximately 165,000 GWh of electricity from fossil fuels.

She added that even if B.C. tried to get off fossil fuels by developing run of river projects, including those at Bute Inlet and the Toba River, as well as all the wind power and solar power it could muster by 2030, the province would still come 155,000 GWh short of its projected energy needs.

"Even if we doubled, tripled, quadrupled our conservation and efficiency plans that we have today, we couldn't meet that gap," she said.

"Even if you have the best run of river energy project out there, you're still going to have transmission lines. Everything is going to have an impact."

Outside her points about the expansion of renewable energy, Berman said that First Nations in B.C. have felt "betrayed" by the backlash against green energy.

Just a week earlier, Save Our Rivers Society spokesman Rafe Mair held an event in Whistler and said that First Nations are being "bribed" by IPPs - a comment that former Mount Currie band administrator Sheldon Tetreault said he found "offensive" when he read about it in Pique .

As an example, Berman invoked efforts by Guujaaw, president of the Haida Nation on the Queen Charlotte Islands, to build a wind energy project on Hecate Strait, as well as numerous other projects in which B.C. First Nations have a stake.

"We should certainly not be opposing the Haida when they do their IPP wind project," she said. "We should not be opposing the Hupacasath or the Klahoose or the many other First Nations who have spent decades protecting their territories and are doing an admirable job finding sustainable development and green jobs.

Though she attempted to assuage differences between people on either side of the green energy debate, Berman's talk nevertheless ignited passions among Sea to Sky residents concerned about climate change.

Eckhard Zeidler, a councillor with the Resort Municipality of Whistler, implored Berman during the discussion period to be part of the "solution" to climate change in B.C. because he's not sure whether her organization is currently part of the solution or the problem.

He then brought up community consultations that preceded the Sea to Sky Land and Resource Management Plan (LRMP), talks that resulted in a call to make 11 rivers in the region off limits to independent power generation. He complained that that provision was never entered into the LRMP.

Nigel Protter, a Pemberton-based energy consultant and wave energy developer, represented the energy sector at those discussions. He opposed that provision because he claims it was drawn up "in a bar" and did not have any science attached to it.

Whistler Mayor Ken Melamed, also sitting in the audience, shaped his hands into a "T" as Protter attempted to speak, trying to keep him from openly responding to Zeidler's comments during the discussion.

Ultimately Berman concurred with some of the concerns brought up by IPP opponents. She agreed the government needs to seek out rivers and ecosystems that are best suited for power generation but said that "blanket opposition" to the projects is moving dialogue away from climate solutions.