Jeanie's cub to be released in June

Jeanette spent winter with Critter Care in Langley
May 2, 2012 9:00 PM By: Andrew Mitchell 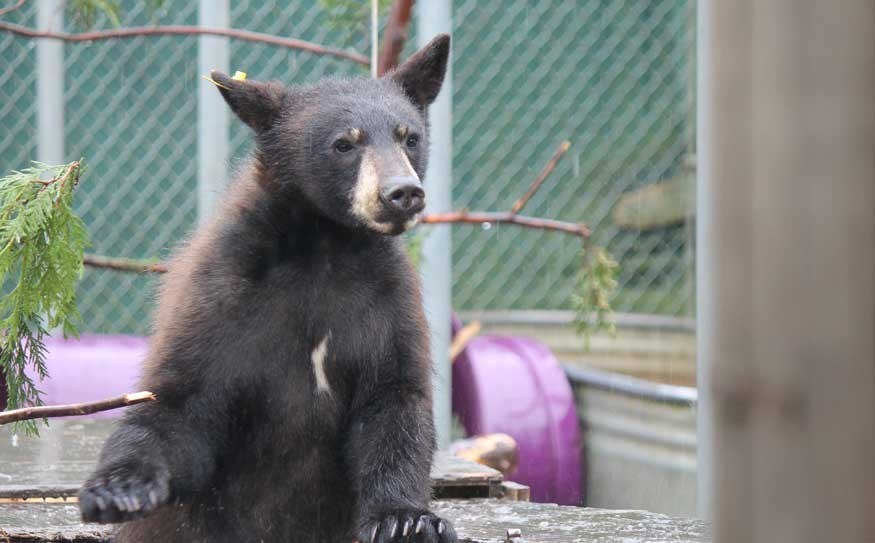 Postcard ready Jeanette, the last cub of Whistler's famed black bear Jeanie, is doing well and will likely be released back into the wild in June. photo by critter care

Whistler's most famous bear is no longer with us, but the word from Critter Care Wildlife Society in Langley is that the last cub Jeanie produced, named Jeannette after her mom, is doing well.

When we last checked in, Critter Care was cutting back Jeanette's food to encourage her and other bears at the centre to hibernate, and winter went as well as could be expected.

"She was in a cage with five other bears and they all hibernated together," said Angela Fontana, senior animal care supervisor for Critter Care. "They actually dug their own den — and completely destroyed one of our sheds to dig it — but it was one of the most impressive dens that our bears have ever dug. They just knew what to do, and dug a big den that they could all get into."

With a mild winter in the Lower Mainland, Jeanette and the other bears emerged from hibernation early but in good health. They are now being fed fresh grasses and dandelions to replicate the spring foods they would be foraging for in the wild.

Fontana said they were looking to release Jeanette — and 15 other bears at the centre — in mid-June. The Conservation Officer Service and a provincial biologist will decide when, and where, to release the bears.

There are a number of things to take into account before releasing a bear, said Fontana, including the amount of competition in an area from other bears.

"Because these bears are cubs and don't have an established territory, the females generally stay close to the area where they're released," said Fontana. "We don't even know (where they're going). It's something the biologist and conservation officer will talk about and make a decision."

Health-wise, Jeanette is doing well. She hasn't been weighed yet, but is the right size for a yearling born in spring of 2011. She also appears brown in the photos, but that's only because she's getting her summer coat in. She does sport a white patch on her chest, which is one of the identifying marks that made Jeanie so easy to spot.

Jeanette has already been tagged for identification. Before her release she will be weighed and have a medical checkup.

The actual details of Jeanette's release into the wild won't be announced. While it's likely that Jeanette will return to Sea to Sky, that's as much information as Critter Care can share.

"We don't tell people because sometimes people will try to find them (the bears)," said Fontana. "She will definitely be released somewhere in that area, but we don't know exactly where."

Jeanette was orphaned in October 2011 after a series of escalating bear encounters involving her mother Jeanie, one of Whistler's best known and most photographed and filmed bears. Jeanie was the subject of several documentaries, a photo book, numerous postcards and posters, and was known around the world. When she was killed, messages came in from as far away as Japan, Australia, Germany and the U.K.

In the three weeks before the Conservation Officer Service made the decision to capture and destroy Jeanie, she had broken into several restaurants and charged employees. She was also acting aggressively around pedestrians in the village, and was not responding to hazing techniques.

Some have suggested that the restaurants were to blame for not following bear safe protocols, making bear attractants available and leaving doors open.

As well, due to the cold and rain last year the berry crops were poor, leading to an escalation in human-bear conflicts as bears foraged for food they needed to survive the winter.

Critter Care is a non-profit society that cares for bears that have been injured, orphaned or abandoned, as well as other native wildlife. They strictly limit contact with humans while they care for animals that are going to be re-released into the wild. You can make donations at www.crittercarewildlife.org.