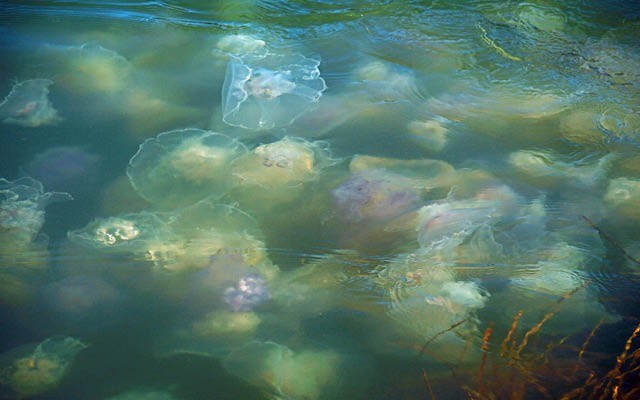 JELLY NOT JAM The recent appearance of a massive group of jellyfish caused a stir in the Squamish estuary, as interested observers debated whether it was a sign of pending doom or just nature surprising us with something a little different. PHOTO SUBMITTED BY BREANNA WILSON

Howe Sound has given us so much to talk about in recent months and now it's jellyfish creating the latest buzz.

Dolphins are being spotted in large numbers around the sound, Orca sightings are on the rise, a humpback whale was spotted in May and a grey whale delighted visitors and residents for a few days in 2010. Sunflower sea stars are reportedly dying off at an alarming rate and news of a healthy population of glass sponges caused headlines earlier this year as well. The herring population in Howe Sound has also ballooned over the course of the last few years.

Now the discovery of jellyfish in a place where they are rarely seen has citizen scientists comparing notes. Breanna Wilson of Squamish spotted a massive bloom of the ghost-like white and purple translucent beings. She was out for a walk along the training dyke that separates the Squamish River from the Squamish Estuary at Howe Sound's northern extreme when an equipment operator working near the water pointed out a massive collection of jellyfish in the brackish estuary waters.

The sight inspired Wilson, who happens to be a photographer, to snap a bunch of photos that she later posted to Facebook. She wrote that she had never seen jellyfish in the estuary. Her pictures prompted an online discussion with other interested estuary observers. Nobody had ever heard of jellyfish gathering in the estuary in the numbers seen earlier this month.

"People like the jellyfish photos I took," said Wilson from her home in Squamish. "It has been a mixed reaction. There's been some people that have had fairly negative reactions to it and then others like my old biology teacher Dave Colwell."

According to Colwell, plankton abundance is a common cause of jellyfish congregations.

Colwell is a retired Howe Sound Secondary School teacher who also happens to be an avid diver and boater. He knows the Howe Sound waters well.

Based on what Colwell sees in Wilson's photos he concludes a common species known as moon jellyfish invaded the estuary to feed on unusually high amounts of plankton in the water.

"They're completely dependent on what is floating in the water that's edible," said Colwell following days of speculation by concerned Squamish residents who felt the appearance of the massive group of jellyfish was an ominous sign.

"My personal opinion on this in Howe Sound is that we had a very warm summer, the rivers were running off a lot of glacial till right the way through the summer, which is kind of unusual. Usually that stops in July," said Colwell.

"As we get these warm spells you're going to get extra minerals that come in the water from erosion."

Colwell believes the jellyfish simply found a place where there was lots of food.

Tsawaysia Spukwuas of the Squamish Nation, who is known by most as Alice Guss, also took an interest in Wilson's jellyfish images.

"They're telling us something," said Guss.

She doesn't know exactly what the message is but she said her first reaction was one of fear.

"I asked my mom, 'Did you ever see jellyfish here like that?' She goes, 'No' and I told her where it was," said Guss.

Her mother is 82 years of age and in her lifetime Guss' mother has never seen or heard of the phenomena.

"It's opening my eyes, my body and my spirit so I want to look into it," Guss said of the jellyfish bloom.

Outdoor enthusiast Murray Soveriegn was also impressed by the images Wilson posted to the Internet.

"I've never seen more than one or two at a time in all my years of paddling in the estuary," wrote Soveriegn in a Facebook post.

Colwell isn't concerned by the unusual sighting and suggested it probably isn't as rare as many people believe it to be.

"I don't think there's any cause for alarm at all," said Colwell.

Compared to previous decades when two pulp mills were dumping dioxins into Howe Sound on the east shore, while acid rock drainage from the mining operations at Britannia were polluting the western shores and mercury was seeping into the environment from a Squamish chemical plant, Colwell said the sound has come a long way.

"The sound is doing better than it has ever done," said Colwel.

Guss reflected on the bigger picture. She said the jellyfish caused her to ponder how things change.

Her thoughts line up with the record numbers of pink salmon that spawned in the rivers around Squamish this summer and early fall. The huge return prompted the Department of Fisheries and Oceans to allow fishing boats to drop their nets into Howe Sound to catch pink salmon for the first time in decades.

Recreational anglers flocked to the shores of Howe Sound and the rivers leading into the body of water in the late summer in the hopes of getting a pink salmon on the line. Eagles are now doing the same as the winter salmon runs begin in Squamish.

The final word on the jellyfish issue rests with Colwell. He said the matter is a complex one with many factors at play.

"We're not always the culprit and nature has still lots of checks and balances," said Colwell. "She/he has been at it for a very long time."