Jones comes through for cancer camp 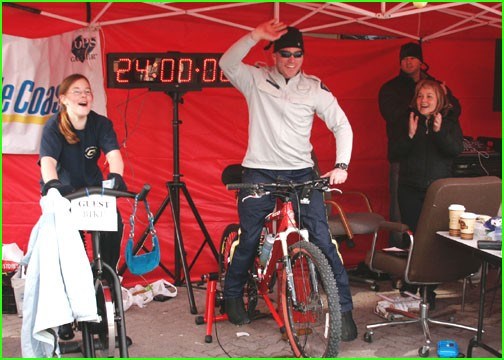 He didn’t actually travel anywhere, his mountain bike was hooked up to a trainer the entire time, but his journey still brought in more than $7,500 in donations.

That’s enough to send up to eight kids to Camp Goodtimes, a doctor and nurse supervised summer camp run by the Canadian Cancer Society for children undergoing cancer treatment. It costs about $1,000 per child, per week, to ensure that there is proper medical supervision for campers, even though most of the staff are volunteers.

Jones’ goal was to bike for 24 hours, raising money and awareness for Camp Goodtimes and the Canadian Cancer Society. To ensure that people got their money’s worth, he paused the clock every time he went to the bathroom or changed clothes.

Aside from a little expected soreness – 24 hours is a long time to spend to a bicycle seat – Jones was elated by the experience.

"It was awesome," he said. "People came to visit me several times, and brought my presents of food and drinks and clothing. Some people who stopped by the night before came back the next day and when they saw I was still going they made some big donations. I’m just amazed by how generous people were."

A huge crowd of supporters had gathered to watch Jones hit the 24 hour mark, after which point Jones said a few thank-you’s and headed home for some much needed rest.

For the most part the fundraiser went well. His fellow police officers even hung a doughnut in front of Jones bike to spur him on, and he was surrounded by well-wishers most of the time. The lowest point came in the early hours of the morning, when he was mostly on his own.

"There was no point I even thought about stopping, but at about the 16, 17 hour mark when there weren’t as many people to talk to and I started to feel really tired. I was nodding off in the saddle. But as soon as things picked up again in the Village I got my wind back and was strong until the finish," said Jones.

Despite the success of his fundraiser, Jones said he wasn’t planning to make it an annual event. That’s not to say his fundraising days are over, but he’s going to look into some other possibilities while also remaining involved with the Cops for Cancer fundraiser. He’s also applied to be a counselor at Camp Goodtimes this summer.

Jones is still taking donations for the next few weeks. If you’d like to make a donation you can contact him at 604-905-1005.