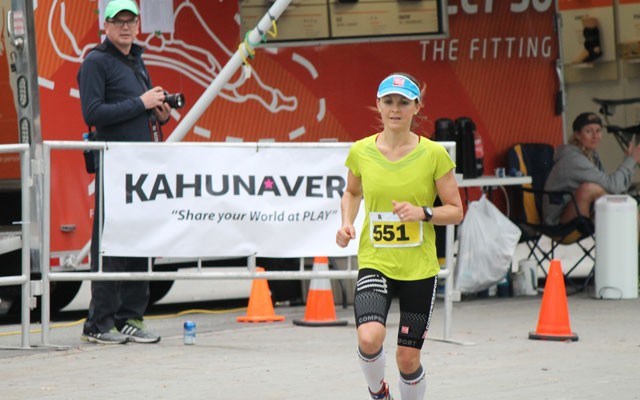 Not bad for a first time.

Catrin Jones opted to take the leap up to the 50-mile (80-kilometre) distance at the Whistler 50 Ultra on Saturday (Oct. 17). The Victoria runner made the most of it, setting a new women's course record by busting Jenn Segger's old record by six minutes and 30 seconds.

All told, Jones crossed the finish line in six hours, 24 minutes and 50 seconds (6:24:50) to capture the women's crown a week after running her hometown Victoria Marathon where she won her age group and was third overall among women.

"I really came with no expectations, having run the Victoria Marathon last Sunday," she said. "I'd always wanted to do this 50-mile (race). I'd done it in the relay but I'd never done it solo. I figured I'd give it a shot."

Jones said the longer distances are just part of a natural progression as she improves as a runner.

"Over the years I've gotten better and better," she said. "The longer I'm out there, the more comfortable I get."

Kelowna's Melanie Bos, the 2012 champion, and Vancouver's Tara Berry rounded out the top three for the women.

On the men's side, Jesse Booi of Vancouver crossed the finish line 6:40 ahead of Jones to take the men's title. Booi made his debut in the event and was pleased, overall, with his result after entering the day, like Jones, without expecting a whole lot.

"It was awesome. It was a really good day. I wasn't expecting to do that well, but the weather was good and the nutrition kept up," he said.

Last year's champion, Roy Kok, was hampered by cramping but still came through with a time of 6:40:20. Victoria's Glenn Jasechko placed third among men.

Full results are online at www.startlinetiming.com/en/races/2015/whistler50/event/Ultra.