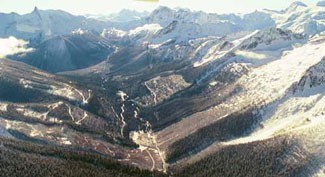 It’s taken over 13 years to get there, but at last the would-be developers of the Jumbo Glacier Resort in the East Kootenays have an Environmental Assessment Certificate – albeit with 15 amendments and 195 changes to Jumbo’s development plan.

The Ministry of Sustainable Resource Management confirmed the completion of the environmental assessment on Oct. 14, almost a month after the process was expected to wrap up.

The assessment is considered a major hurdle for the $450 million resort, which will involve the construction of 6,250 bed units (including 750 staff units) and at least 20 lifts in the upper Jumbo Creek drainage, located 55 kilometres west of Invermere. Because of the glaciers, ski operations will run year-round.

George Abbot, the Minister for Sustainable Resource Management, says that even with the environmental assessment, the approval process is not yet complete.

"The Province is required by law to review these matters, but the environmental assessment is just one more step," he said. "There will now be a detailed development of a master development agreement with Land and Water B.C. If that agreement can be reached then a final step will be required by the Regional District of the East Kootenay."

The regional district for the area will ultimately have to approve zoning for the project, which may prove to be the most difficult hurdle for the resorts’ proponents. The main reasons are the large public opposition to the resort in the area, the concerns of local governments, and the fact that the resort is located close to a dozen other ski areas that are not yet running at capacity.

Following the government’s announcement the Regional District of the East Kootenay issued a release saying they would review the impact that the decision would have on local governments before making a decision.

The Regional District is neutral on the development, but has already expressed concerns regarding the impact the resort would have on sewage, storm drainage, roads, policing, hospitals and emergency services.

The mayor of Invermere, the closest community to the resort, has already voiced his opposition to the development, while nearby Radium Hot Springs is in support of the plan.

Another challenge for the resort developers are the various conditions tied to the environmental assessment.

With one of only 49 stable populations of grizzly bears based in the area – despite the areas past history of logging and mining – environmental concerns have been a central argument for the resorts’ opponents.

There are also First Nations considerations, in that the developers must include an Impact Management and Benefit Agreement with the Ktunaxa/Kinbasket Tribal Council into the final Ski Area Master Plan.

Still the resort's proponents are confident that the project will ultimately be approved.

"The costs of these (15 conditions and 195) commitments are factored into the economic model for the resort and are for the most part normal components to operating a ski resort," said Grant Costello, the vice-president of Jumbo Glacier Resort.

It’s been an exhausting process, but if the zoning approval process with the regional district and talk with local First Nations are successful, Costello can see the project getting underway in 2005-2006, and continuing for approximately 20 years.

When asked whether the provincial governments recent efforts to cut red tape that discourages investment and development of new resorts and tourism opportunities has been helpful, Costello said the process continues to be tough.

"Following 13 and a half years of process, I guess you can say we feel somewhat overwhelmed by the length of it," said Costello. "I do not believe the Liberals’ efforts to cut red tape has yet been applied to this project. The project was under the Environmental Assessment Act for nine and a half years, three and a half of them under a Liberal government.

"This part of the process was supposed to last for 18 months originally. However, the revisions that were made to the Environmental Assessment Act in December 2002, limiting the process to two stages instead of three and giving more authority to the Project Director, probably saved another two or three years of process."

Having that environmental assessment in place will improve the resort’s case with the regional district, "especially one which resulted from so much study and input," added Costello.

Opponents of the resort were discouraged by the province’s decision to award the project an environmental certification, and pledged to continue the battle.

The Western Canada Wilderness Committee does not have an ongoing campaign regarding the Jumbo proposal, but has lent its support to opposition groups like the Jumbo Creek Conservation Society.

According to Andy Miller, a wildlife biologist with the WCWC, there is still a lot that can be done to stop the development.

"We’re hoping to… coordinate efforts to communicate to residents in the East West Kootenays and let them know that this thing is far from over, that it’s not too late to take actions… with the regional district," said Miller. "Town councils, mayors, business leaders, many of them are already opposed to this. If the balance of power in the provincial government is in favour of this, then we need to turn our focus away from there and really concentrate on the region."

Grizzly bear and mountain cariboo habitat and travel corridors will remain central to the opposition arguments, but there is a powerful economic argument as well according to Miller.

"In Invermere the entire council and mayor are against it, and that’s the closest jurisdiction to the resort. The reason they don’t want it is because they don’t need it, there are tons of existing resort opportunities around them that make better sense to support. How does Invermere benefit from a small city built up the road if people go right through their town to get to it?" asked Miller.

Almost all of the resort area is already covered by tenures, he adds, which are already making a contribution to the economy.

There is no middle ground on the resort proposal unless the proponents are willing to reduce it in size from a resort to a ski hill and relocate it somewhere else, says Miller.

"Is there a compromise? No, and that’s been the answer for almost 15 years. That’s why it’s been so controversial, they (the developers) won’t back down," said Miller. "There are a lot of places they could go with less controversy, but whenever you want to build a small city in an alpine area that is notoriously sensitive, you’re going to meet opposition."

The argument that the area has already been logged and mined is also irrelevant because most of those activities took place on the lower valley bottom, rather in the higher areas that function as wildlife habitat and corridors. "That’s why the area has been up for protection in the past," said Miller.

The resort proponents expect negotiations with the regional district to go on for at least a year. There won’t be any more public consultation, which Miller says means it’s time for "grassroots democratic" campaigning – phone calls, faxes, letters, and protests.

"This isn’t over, not by a long shot," he said. "In fact, now that the province has shown where they stand, and those avenues have closed, we’ll be able to focus more of our energy on the community."

Among the almost 195 commitments that the MSRM has asked of the Jumbo developers are:

• An agreement to discourage employees and visitors to the resort to use Jumbo Pass, which is used for heli-skiing and backcountry touring

• Provide detailed economic projections for the resort, including a complete assessment of costs

• A plan to minimize human conflicts with wildlife on the roads and in the ski area, especially grizzly bears

• Annual monitoring of socio-economic impacts of the resort

• Keeping access open within the controlled recreation area for R.K. Heli-Ski Panorama, which has an existing tenure for the ski area

• Maintaining the road and parking area for non-resort users, such as hikers and backcountry skiers, including avalanche control

• An agreement to house 90 per cent of workforce on-site

The complete list of commitments is 19 pages long, and is available at the Environmental Assessment Office.