As WFM board prepares for summer, resignations continue
Feb 8, 2019 12:00 AM By: Braden Dupuis 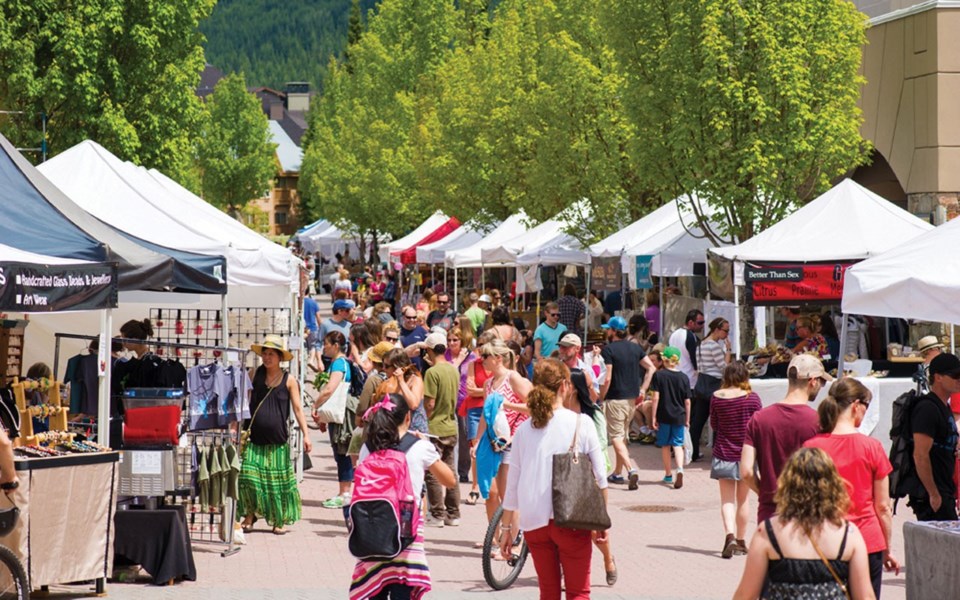 farm fresh? As the Whistler Farmers' Market works towards its 2019 season, some still have concerns about the way the board is operating. photo by mike crane/tourism whistler

As the Whistler Farmers' Market (WFM) searches for a new market manager, two board members have now resigned.

The resignation of one of the board members was a challenge, but the jury process for the wildly successful market is underway, meanwhile contract negotiations with landlord Whistler Blackcomb won't take place until May.

First started in 1994, the market grew steadily over the past decade under former market manager Chris Quinlan, expanding from about 50 vendors a day in 2010 to 80 or 90 a day (along with adding Wednesday markets and Saturdays on long weekends).

Last summer the market, which welcomes between 5,000 and 7,000 people on a busy Sunday and regularly does more than $1 million in annual sales, came close to not operating after a dispute between Quinlan and the then board got nasty. But at the eleventh hour the parties worked out their differences and the market, which was identified as a major cultural asset in a municipal report in 2010, went ahead (see "A Tale of Two Farmers Markets," Pique, May 16, 2018)

But as the WFM tries to enact new governance structures ahead of 2019's market, some still have concerns about the board's past treatment of Quinlan and the future of the market. Some former directors say Quinlan's exit was a coordinated effort by a handful of disgruntled vendors and board members, and they remain concerned about the governance of a market that supports so many vendors and injects millions of dollars of spending into Whistler.

'SOMETHING FUNKY GOING ON'

It began at an Annual General Meeting in October 2017, when the board was effectively doubled, explained longtime former director Renee Dupuis.

"They'll deny it to their grave that they treated him (Quinlan) poorly, but as soon as the AGM happened, everybody who was running had a hidden agenda, and I know of it, because I'm part of the market and sat on the board for seven years so I was very informed—I knew who had quarrels with him, and it was the people who were running," Dupuis said.

The board had received complaint letters about Quinlan's management style prior to the AGM, and was considering how to handle the situation when things ramped up.

Those who wanted to see Quinlan gone—including some board members—began soliciting vendors for further letters of complaint.

An anonymous survey was also conducted.

Pique spoke with three vendors that confirmed they had been approached to write complaint letters about Quinlan, including Steve Gourley of Goldstrike Honey.

In Gourley's case, he said he was approached multiple times.

Gourley himself was elected to the board in November, before resigning the following month.

"I don't know what the agenda is. It confuses me," he said.

"I can't really talk about the board stuff, but I resigned because of it ... there's something funky going on here with the existing board that's on there, and I don't know why people actually voted them back in."

Gourley added that he had his moments with Quinlan, too, "but you know what? He ran a great market, and he built it. I was there since he started it seven years ago, and I think he ran a good, clean market."

Another director, Carola Moore, also resigned from the board in January.

Asked about the board's investigation into Quinlan—the WFM's only employee—board chair Nathan Hawkins said he believed everything was done properly.

"It was done basically following a practice of WorkSafe BC, so basically all the allegations of misconduct that came through from those complaints, basically we just followed the legal proceedings and followed it through that way."

As for the allegation of vendors being solicited to write complaint letters, Hawkins said he couldn't comment on that.

The board is trying to move beyond its past drama, instituting new bylaws, a code of conduct, guidelines for directors and a bullying and harassment reporting procedure.

"We really do want to move on," said WFM vice chair Alyssa Belter, who was elected to the board for the first time in November.

"It feels that this conflict has really divided our membership, and we're really trying to get over that, because we want to be a society where people get along, and where we can agree on things."

Belter said she's been a vendor at the WFM for four years, and while she's never had a problem with Quinlan, the oversight is a necessary change.

Having attended markets all throughout the Lower Mainland and Sea to Sky, she and her husband jokingly referred to the WFM as the "wild west" of farmers markets when they first began attending, Belter said.

"There were definitely rules and regulations for the (Whistler) market, but there was a very different vibe to it, and there wasn't that sort of oversight from the board," she said.

Throughout the human-resources process with Quinlan, the board still wanted to work with him, Hawkins said, noting that the board was ready to present recommendations at a meeting before Quinlan resigned.

But by this point the relationship had become so strained that the two parties weren't talking.

Dupuis was one of three board members—along with Mihaela Boaru and Emma Sturdy—to sign a letter sent to members of the WFM society on April 20, calling for a Special General Meeting to vote on three resolutions: That the WFM cease all legal expenditures unless otherwise approved by the membership at a general meeting; the removal of chair Nathan Hawkins and vice chair Joanne Thomas (Hawkins' wife) from the board; and for an election to appoint two new members.

The letter drove a further wedge in the board, resulting in the three women getting "roasted pretty good" at a WFM board meeting, Boaru said.

Both Boaru and Dupuis said they submitted official complaints about the alleged conduct at that meeting, and in other board dealings, without getting satisfactory responses.

Dupuis resigned from the board in response.

Like many others Pique reached out to for this story, Dupuis and Boaru are wary of speaking out, fearing rejection from the market or other consequences.

Ultimately, though, Dupuis feels it's important to speak her truth.

"This is my whole perspective on the whole thing: they have made (Quinlan's) life a living hell. What is it going to benefit me trying to make them look bad?" she said.

"I just want to make it (known) Chris was not treated well, and whoever it was who did it, they need to take accountability."

This story was updated Feb.11 to reflect the fact that the jury selection process is in fact underway and on schedule. An earlier version of the story suggested the selection process was delayed. Pique regrets the error.