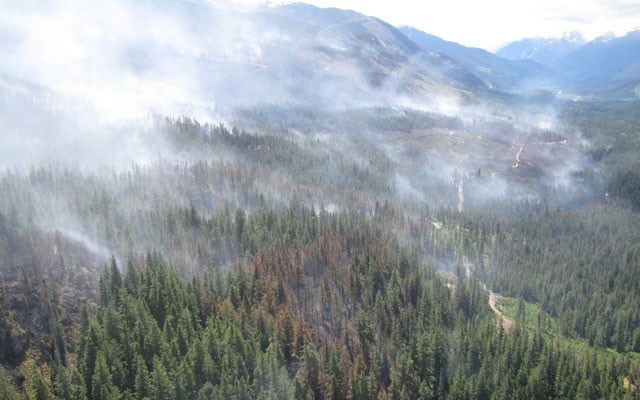 GET SMART The Elaho Wildfire burned for much of the summer of 2015. The municipality is once again urging residents to be FireSmart this spring. File photo courtesy of BC Wildfire Service

Whistler got a stark reminder about the importance of being FireSmart in 2015.

The source of the smoke was several wildfires far from Whistler's borders, but the impact was felt close to home.

"(It) reminded us that it could so easily happen here, and that we really have to be vigilant about this," the mayor said.

In this year's municipal budget, the Resort Municipality of Whistler (RMOW) has included about $400,000 for FireSmart related programs, Wilhelm-Morden said.

The RMOW is also expecting $186,762 of provincial grant money through the Union of BC Municipalities to be used for wildfire thinning projects in 2016.

"There's several components to the program this year," she said, noting that the projects are split into three areas: wildfire fuel thinning in specific neighbourhoods, a landscape level fuel break program along the Callaghan forest service road and an education component.

"This year (the fuel thinning project) is above Brio," Wilhelm-Morden said. "Next year we're looking at above Alpine Meadows and Big Timber Park in Kadenwood in 2018."

The first step for homeowners is to reduce flammable materials in their yards and around their homes. Using the right building materials is key too, whether you're building fresh or renovating, Playfair said.

"We'll have information available through building services at (municipal hall) for people that are maybe starting a new project, but also reaching out to people with existing homes about what they can do to make those buildings more FireSmart, in addition to what they can do in their yard," he said.

The WFRS also offers free home assessments on all properties in Whistler.

It's crucial for stratas to be FireSmart, Playfair added.

"A number of stratas at this point in time, being a few years after the initial constructions, have landscaping that is growing up and becoming concerning as far as fuels go in and around the strata buildings," he said.

The RMOW and fire department will once again be offering free garden debris drop off on specific weekends, as well as rotating bins through different subdivisions.

"We may be able to fund some chipping in subdivisions for people that gather together," Playfair added.

But to fully implement FireSmart practices, neighbours will have to work together to ensure the safety of the entire neighbourhood — and, in turn, the community.

"The reality is that you can't do it by yourself," Playfair said.

To learn more about FireSmart practices head to www.whistler.ca/fire/firesmart.