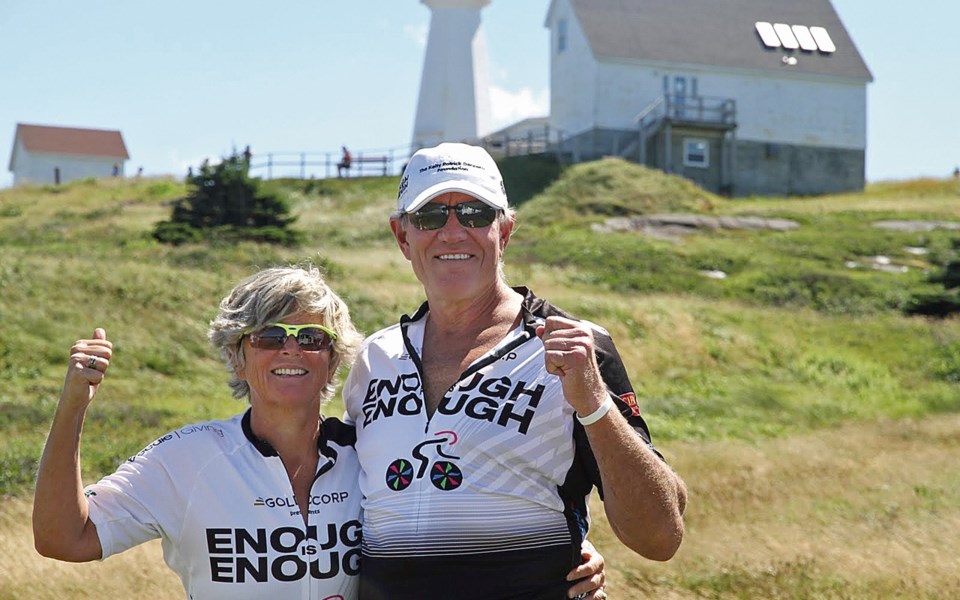 Ginny, left, and Kerry Dennehy in 2013 on their cross-country bike ride to raise funds for youth mental health. The Kelty Patrick Dennehy Foundation's annual fundraiser returns to Whistler on Sept. 12. RIDE on

two of b.c.'s biggest advocates for youth mental health are reviving a fundraiser for the Kelty Patrick Dennehy Foundation after a years-long hiatus from Whistler.

Whistlerites Kerry and Ginny Dennehy, who launched the non-profit in 2001 following the suicide of their 17-year-old son, Kelty, are hosting "We're Back for Mental Health" next month, the first major foundation fundraiser held in the resort in more than a decade.

"We haven't done anything since our last golf tournament in 2008, and we thought it was time to muster up some energy for another fundraiser. The idea was to do something a little different," said Kerry.

A supper-club concept that will include dancing and live music by Fabulous George and the Zodiacs and Juno Award-winning singer-songwriter Barney Bentall, the event will raise money for several ongoing programs at the foundation.

The Dennehys have raised millions of dollars for youth mental health in the nearly two decades since the loss of their son, and in 2007, the Kelty Mental Health Resource Centre opened as part of Vancouver's BC Children's Hospital. Last fall, the centre also revamped its website—keltymentalhealth.ca—to be more user-friendly and features updated resources for youth, parents, caregivers, health professionals and school personnel, as well as information on mental health and substance use challenges that has been reviewed by clinical experts at BC Children's Hospital.

Kerry also highlighted a new online therapy program being developed called Kelty's Keys, which will connect youth to one of 38 trained psychologists.

"First of all, it takes away the stigma by dealing with a psychologist online. You don't have to go to the bricks and mortar of a psychologist's office," he said. "Young people are much more comfortable dealing online and it's much more efficient, too, because a psychologist can deal with four times as many people through these online programs as they can sitting in their office."

"I think you're going to see [Vancouver General Hospital] with the funding restrictions being so tight these days, that they need a more efficient way to deal with people—and many more people as well—so this is one area where the online therapy can be very effective," he added.

Whistler has long been a major booster of the Kelty Patrick Dennehy Foundation, and the organization has responded in turn by helping establish a range of supports for youth in resort schools.

"I think it was a big shot to the high school when Kelty took his life because he was so well known," Kerry said. "It really focussed on the need to establish resources and programs for youth at a very young age. That's why we've sent so many counsellors and therapists into the schools to train the teachers, the school counsellors and the principals and everything about how important it is to talk to everyone and spread the word that peer support is very important.

"To engrain this in the youth and the culture in every community, especially what we've tried to do in Whistler, it's got to be ongoing. It's crucial to recovery and the erasing of the stigma of it so people can talk openly."

We're Back for Mental Health is set for Thursday, Sept. 12 at Buffalo Bills and includes a discussion about mental health, a silent auction and "other surprises," Kerry said.

Tickets are $50 and include dinner, available at thekeltyfoundation.org.