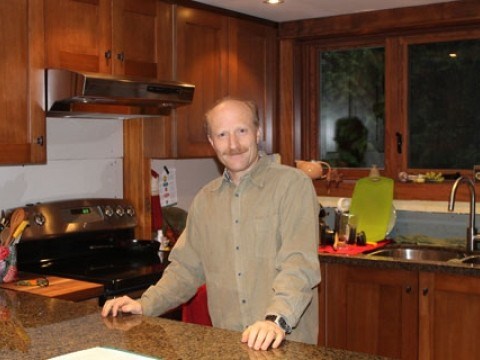 The race for the mayor's chair in Whistler has picked up the pace this week in the wake of Mayor Ken Melamed's plans to go for a trifecta.

The mayor announced he will be running for a third term as mayor in November's election, effectively changing the two-person match between Councillor Ralph Forsyth and former councillor Nancy Wilhelm-Morden into a three-way race.

With roughly ten days left to declare, the mayor said one of the reasons he waited this long to announce was to gauge his competition.

"I wanted to see who was going to step forward," said Melamed, keeping cozy in his slippers as the October night drew in quickly around his Alpine cabin.

Lovingly restored by the mayor and his wife over the years, Melamed is relaxed at home, a picture in sharp contrast to the fight that lies in the weeks ahead against what is arguably his toughest competition in an election to date.

He's under no illusions that this won't be a battle, maybe even a bitter battle with emotions running high in Whistler. Emotions were so high earlier this year that Melamed's car tires were slashed, as were those of former municipal administrator Bill Barratt - a low point in the term.

As with past elections, and Melamed has been through his share in the last 15 years as a councillor and then as mayor, he has steeled himself for the fight.

"You never for a minute assume it's going to be easy," he admitted.

This is different from elections past.

In 2005 when he first ran for mayor, Melamed knew he wanted to see Whistler through the Olympic and Paralympic Games in 2010 - he knew he wanted to have two terms in office. He beat out Ted Nebbeling in 2005 by about 350 votes for a total of more than 1,700. Perhaps the deciding factor in that election was the near 350 votes taken by the third candidate, Kristi Wells.

In 2008, with five mayoral candidates in the running, Wells was his stiffest competition. Again, he won by over 300 votes - 1,527 votes for Melamed, 1,218 for Wells. There was no main third contender in that race.

This time around he had to do some soul searching, ask himself what he really wanted, particularly in light of the volatile mood of the community.

"It was a different process (deciding to run for a third time). What hasn't changed is my love for the community and my commitment."

Sectors of the community, however, are demanding answers from this council - from pay parking, to the asphalt plant, to transparent government and municipal spending. Hours after his announcement to run, a Facebook page was created called "Vote for Ken Melamed for Mayor 'NOT.'"

"We had some things come out of left field this term," said the mayor. "Usually we can see these things on the radar. This term has dealt us a couple of unexpected challenges. But again, I feel that we have risen to the challenges.

"Every time we get together my principal philosophy is: what can we do in this situation that's in the best interests of the community? How do we serve the people of Whistler? How do we protect the taxpayer?"

After six years as mayor, Melamed said he's now in his stride, having gained a deep understanding of the inner workings of the resort from his roles on the boards of Tourism Whistler and the Chamber of Commerce. He also has the added benefit of seeing the arm's length perspective of the resort through his personal relationships in the provincial and federal governments.

Melamed said that experience and those partnerships are "an opportunity for Whistler."

"We're in the post-Olympic reality," he said. "We need to find a way to transition into that reality and evolve the resort to meet those challenges, working together, listening to each other, but also continually looking for new ideas."

Under his watch he saw Whistler through a successful Olympic and Paralympic Games that put the resort on the world stage and showed Whistler at its best. He also is the mayor who can say that employee housing shortages are no longer at the forefront of the community's collective list of woes.

But it hasn't been an easy term - a lawsuit with the owner of the asphalt plant is ongoing, sky-rocketing transit costs threaten to cripple the budget, a pay parking strategy fell flat and cannot pay for a $5.7 million debris barrier as planned, and council relationships have been stretched to the limit. Just last week, former municipal administrator Bill Barratt filed a lawsuit against the municipality, claiming wrongful dismissal and putting the blame squarely on council's shoulders.

Melamed has found himself on the losing end of many contentious and close votes this term.

"I certainly wouldn't be the first mayor in Canada that has moved into what would be called a minority position," he said. "I've never changed my values. I've always voiced my opinion. I keep coming back to the table with the best interests of the community in mind and try to provide the leadership."

Then again, said the mayor, life in politics has never really been easy.

"I actually think there's a lot to be said for having been through the mill and the experience I've gained," said Melamed.

"I've proven that there's no challenge too hard."