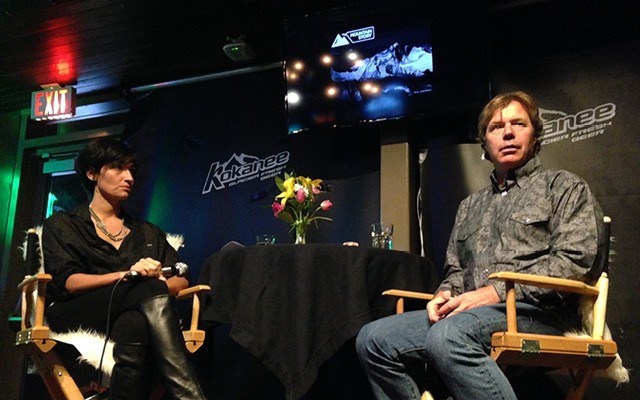 HARD TRUTHS Naheed Henderson and Ken Wylie during a live interview at the GLC on Jan. 23. Photo by Braden Dupuis

When Ken Wylie woke up on the morning of Jan. 20, 2003, his intuition was telling him something was off.

"Every single cell in my body was telling me not to go skiing that day," Wylie said, in a live interview with Naheed Henderson at the GLC on Jan. 23 as part of the just-launched Mountain Story Series.

"I remember skiing up into the terrain where the avalanche happened and just thinking, you know, I just don't want to be here."

Wylie's intuition turned out to be right.

On that fateful day in B.C.'s Selkirk Mountains, an avalanche on Tumbledown Mountain killed seven people.

Wylie — an assistant guide with Selkirk Mountain Experience at the time — was buried.

In the years that followed, Wylie was wracked with guilt.

"One of the hardest things for me to stick with now is the fact that I didn't turn around and say to my guests, 'I don't think this is a good idea,'" he said.

"I didn't want to be the weakest member of the whole experience."

Last year, Wiley published his story in his book Buried — a title that refers to more than just snow.

"Ironically, being under the snow, it felt comfortable, and exploring that a little bit, I think that's perhaps the reason for the title of my book... I was buried as a human being," Wiley said.

"I wasn't showing up authentically in my personal relationships, in my work... and for 10 years after, I wondered why it felt comfortable... and it's because I was always buried."

"In the writing process I discovered that with responsibility comes freedom... I needed to put my mistakes out there as a man, and just sit in that," he said.

In publishing his book and speaking about his experience, Wylie is hoping to address some of the bigger questions around adventure seeking.

"It's a dialogue that's deeper," he said.

"It's asking the hard questions about why we're doing this stuff, and maybe answer the question more deeply than 'because it's there.'"

For Wylie, the pursuit of adventure grew out of a need to escape.

"I often say that adventure has saved my life many times. It saved my life as a teenager, but then that kind of developed into a disruptive addiction."

The Tumbledown Mountain avalanche led Wylie to redefine what courage is.

"I think that because I was an adventurer — I was a rock climber, an ice climber, a ski-tourer and mountaineer — I had assumed I was a courageous person. I just made the assumption, and I didn't have a deeper understanding about what courage is," he said.

If he could do it again, Wiley wouldn't lead that group onto that mountain. He would trust his intuition and speak his own truth, regardless of the social consequence.

"To be a good mountaineer is to know one's self, and that's where it starts," he said.

"And I learned that the hardest possible way."