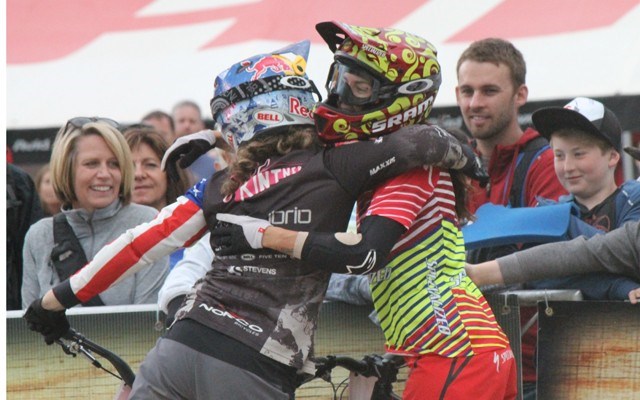 Jill Kintner (left) and Anneke Beerten each had a reason to celebrate after the Giant Dual Slalom on Friday night. Kintner won the race but Beerten claimed the Queen of Crankworx title. Photo by Dan Falloon

Nearly everything about Dakotah Norton gives off an air of the Midwest.

But he's been far from middling at his first Crankworx.

One night after hitting his first podium in the pump track event, the Michigander took gold in his specialty event, the Giant Dual Slalom.

"I didn't think it was going to happen. These guys told me that maybe we'd be spraying some champagne after practice, but I really didn't think it'd happen," he said. "To force it and put down some solid laps and take a victory away is excellent."

In the first run of the two-run final, Norton's opponent, Belgian Martin Maes, crashed late in the race and Norton cruised in for the win. With an injured shoulder, Maes couldn't take part in the second run and Norton paraded down the slope for the easy win.

Great Britain's Bernard Kerr took third and pulled even with France's Adrien Loron for the overall King of Crankworx title.

On the women's side, American Jill Kintner cruised to her third win in as many days, blasting past Dutch rider Anneke Beerten in the final, a day after downing her in the pump track final.

Kintner said slalom is her favourite discipline, and she made the most of the event she'd been eager for all week, capturing it for the fifth time.

"The track's pretty fun. It's a little bit more technical than they usually have, so it played to my favour," she said.

However, once Beerten had made the final four, she secured the Queen of Crankworx title for herself after a long and painful week where she participated in as many events as possible to maximize her point total. Beerten took points in five of the six events she contested to put enough space between her and Kintner.

"(It's) amazing. I'm super stoked. I've been looking forward to this event the whole year and I pushed hard every race. This week has been really challenging with injuries and taking it here tonight is amazing," she said.

In the day's other event, Geoff Kabush of Courtenay and Cindy Montambault of St-David, Que. captured their respective pro divisions in the Canada Cup XC race. Montambault also wrapped up the overall title while Evan McNeely scored the victory for the men.