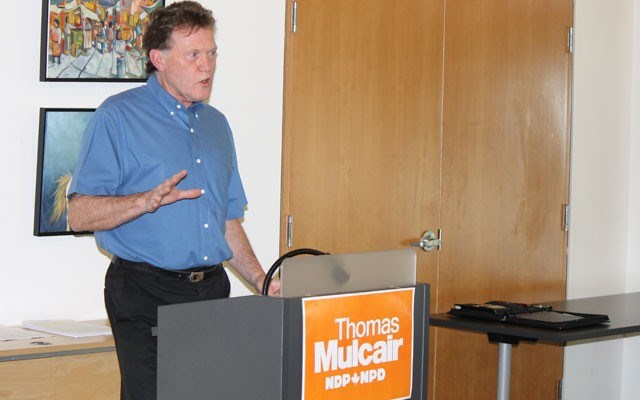 MEET THE CANDIDATE Larry Koopman, the federal NDP candidate for West Vancouver-Sunshine Coast-Sea to Sky, held a meet-and-greet at the Whistler Public Library on July 28. Photo by Dan Falloon

The New Democratic Party candidate for the federal West Vancouver-Sunshine Coast-Sea to Sky Country riding didn't let it discourage him, though.

At the event, held at the Whistler Public Library on Tuesday, July 28, Koopman continued his tour of the Sea to Sky corridor after stopping in Pemberton and Squamish in recent weeks.

Nine local residents attended, though included in that number was former BC Hydro president and CEO Marc Eliesen, who made a speech primarily to ctiticize the National Energy Board and its handling of Kinder Morgan's Trans Mountain pipeline expansion, while also expressing support for Koopman and the party.

Koopman was not discouraged or surprised by the turnout, expecting campaigns to pick up when the election officially begins.

"We had a vibrant audience. It was a good audience — small but beautiful," he said after the meeting. "It's summer right now. People are engaged but not too engaged."

While Koopman hopes to hold another similar meet-and-greet in Whistler closer to the Oct. 19 election date, he said he's happy to focus on door-knocking and otherwise being visible in the community to spread his message.

"Once we get into the writ period, maybe it would be a better time," he said. "We're going to be coming up a lot to do events and participate through the events."

Some residents, while admitting they were ideologically more inclined toward voting for Koopman, wondered about voting for Liberal candidate Pamela Goldsmith-Jones to bring about a change in government.

Koopman cited poll numbers released earlier this month that show a tight race between the Conservatives, Liberals and NDP. The July 10 poll, conducted by Insights West on behalf of the Dogwood Institute, showed Goldsmith-Jones with a slight 23 per cent edge to Weston's 22 per cent, while Koopman wasn't far behind with 19 per cent. Green candidate Ken Melamed polled at nine per cent, leaving a full quarter of voters sitting in the undecided camp.

Koopman said while there are several issues the NDP and Liberals find themselves thinking similarly about, there are gulfs in key issues for him — like the Liberal support for the Keystone XL and TransMountain pipeline projects and anti-terrorism Bill C-51.

Still, he noted that NDP leader Thomas Mulcair had approached Liberal leader Justin Trudeau about a coalition only to be rebuffed.

After a question about proportional representation, Koopman pledged strong support for installing the system instead of the first-past-the-post process, and called on Green supporters to go orange this time around in order for, presumably, a brighter future to come.

"We agree on a lot of things. I encourage the Greens to support us in this election," he told the audience. "Are we going to split the vote? I don't know. The strategic voting thing — I don't know if it bugs you, but it bugs me — because I want to vote for my values. I understand the concept of strategic voting, but does it really work?"

Pemberton residents Adrian and Nancy Bolden have ruled out voting for the incumbent, though the Liberals' support of Bill C-51 have soured them on the Grits.

"When you talk about 'who's the leader going to be?' (NDP leader Thomas) Mulcair looks like the guy I want," Adrian said.

"The Liberals messed it up when they voted for C-51. They were gone from my mind at that point," added Nancy.