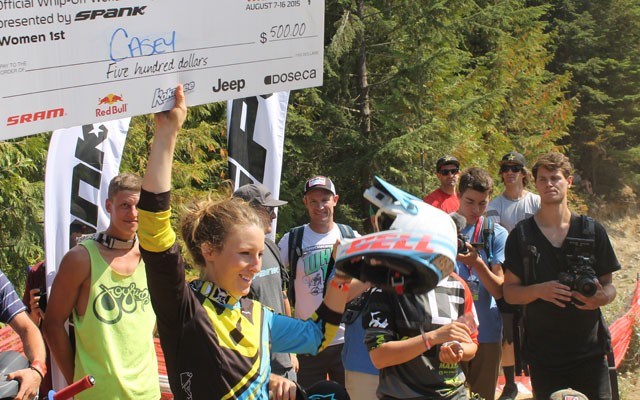 Casey Brown of Revelstoke is shown with her winning cheque after winning the women's division at the Official World Whip-Off Championships at Crabapple Hits on Thursday. Photo by Dan Falloon

Competition at the Official World Whip-Off Championships was so close that a top five wasn't even enough.

With riders putting on a show at the Crabapple Hits in the Whistler Mountain Bike Park, six men ultimately finished in the money at the event.

Andreu Lacondeguy of Spain ended up nabbing the win, scoring $2,000 in the process. Two-time champion Bernardo Cruz was denied in his search for a third but still finished as the runner-up while Ryan Howard ended up in third place.

Lacondeguy was third in the event last year, and said a new bike and an ability to adapt to the conditions helped him make it through.

"It was a little windy, so it was hard to judge the speed," he said. "But we made it work. No one got hurt and we had a good time and made two grand."

The judges acknowledged it came down to the final whips to crown a champion, and Lacondeguy admitted he was glad he had enough in the tank to still impress at the end.

"The whip worked pretty good. I went a little bit faster, because I cased it on the one before," he said. "It was good."

On the women's side, Casey Brown won for the third consecutive year, taking $500 for edging out Lorraine Blancher and Emilie Siegenthaler.

Whistler's Finn Iles was injured and did not get the chance to defend the title he won as a 14 year old last year.