Almost no one at the Squamish Lil'wat Cultural Centre planned to attend an Olympic event when the centre received a call from Marla Zucht of the Whistler Housing Authority two weeks ago.
Mar 5, 2010 7:22 AM By: Claire Piech 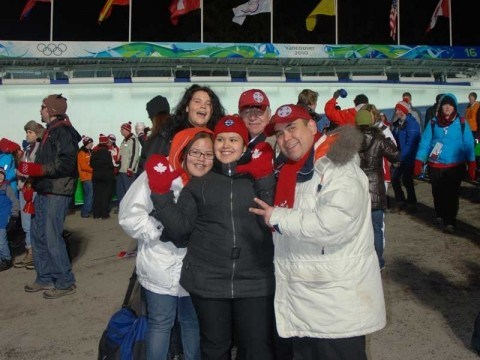 Almost no one at the Squamish Lil'wat Cultural Centre planned to attend an Olympic event when the centre received a call from Marla Zucht of the Whistler Housing Authority two weeks ago.

But as soon as Zucht explained the centre would receive 28 free tickets courtesy of the Vancouver Organizing Committee (VANOC) for the gold medal skeleton competition on Feb. 19, the Olympic spirit instantly ignited.

"There was so much interest that just in the van that brings staff from North Vancouver everyday, everyone in the van wanted to go, the driver wanted to go, and they all decided they were going to stay up late," said Leathem.

Most of the workers commute everyday from Squamish, Mount Currie or North Vancouver for their nine-hour shifts, so finding time to attend the Games was unlikely.

But with the courtesy tickets, almost everyone from the two First Nations working at the cultural centre, along with their family members, got a chance to be part of the sliding centre excursion. Of course, no one knew that they were going to see a Canadian win a gold medal, too.

The workers departed at 3 p.m. that Friday, leaving behind a core staff of three to oversee the private Bell Canada event happening in their building in upper Whistler Village.

Leathem recounted how taken aback the workers were with how easy it was to get to the sliding centre and how friendly the VANOC volunteers and workers were.

"The VANOC volunteers really provided a unique role model for our staff, and I think they got a lot out of it," said Leathem. "The VANOC staff were standing there in uniforms they had to pay for, in sub zero temperatures, in a stationary position for hours, and they still had massive smiles on their faces."

As soon as they got to the Olympic venue, everyone quickly spread out, but the group managed to snap a photo with five of the attendees.

One of the family members was pregnant and she and her family got the royal treatment from VANOC, said Leathem. They were expedited on the gondola ride up and then they received a VIP shuttle ride to Thunder Bird corner, where the bulk of the action happened.

Another worker was only an arm's length away when Jon Montgomery whipped around the track and won the gold medal.

The tickets were part of VANOC's Celebrate 2010 Ticket Program.

Zucht explained corporate sponsors and other groups who couldn't use their tickets donated them back to the organizing committee who in turn redistributed them throughout the province.

Whistler Housing Authority worked with VANOC to make sure the Whistler tickets went to people who otherwise wouldn't have the financial means to attend the Olympic Games.

"It is a great way to spread and share the legacy with our community, to get more people out to experience the Games that might not have the opportunity to," said Zucht.

Most tickets were donated last minute, and as of last week, Zucht didn't know how many free tickets the housing authority had helped to reallocate.

Among the others who received tickets were families renting from the housing authority.