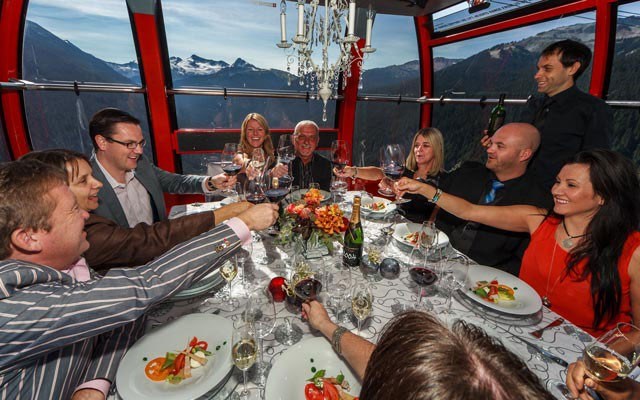 PIE IN THE SKY With Victoria's most recent round of liquor policy changes, ski hills can more easily host licensed events on the mountain, like this past June's Sky High Dinner, served aboard the Peak 2 Peak Gondola. FILE PHOTO

The B.C. Government has heard Whistler's calls for eased liquor regulations loud and clear, making it easier for ski hills and golf courses to expand their licensed areas as part of its most recent round of policy changes.

Made in response to months of feedback during the government's Liquor Policy Review, the Ministry of Justice announced on Monday, Nov. 24 that ski resorts and golf courses will soon be able to apply for single license endorsements that will cover up to 26 events in a calendar year, rather than having to apply and pay for each individual extension.

"The opportunity it gives us is to basically plan out our events and get temporary licensing without having to use up what is a limited allotment on licenses," said Whistler Blackcomb's director of food and beverage, Paul Street.

Previously, businesses were burdened with filing one-off applications —at $330 a pop — to expand their licensed areas, at a maximum of six a year. The new process is meant to encourage ski hills and golf courses to offer more special events at on-hill sites pre-designated for liquor service.

It also allows for a shorter turnaround time if, for example, Whistler Blackcomb wishes to host a beer and barbecue event on the mountain on a sunny day.

"We can also use food and liquor primary licenses in a similar fashion and plan for things like a halfpipe or snowboard event and set up a beer garden," Street said. "It really just gives us more opportunities to give people a greater experience on the mountain."

"Anything we can do to ease the red tape and provide excellent experiences we welcome obviously," he said. "I know it's something the golf industry has been lobbying for for a long time."

Ski hills and golf courses can send out their Temporary Use Areas Endorsements applications beginning on Dec. 9. Locally, the applications will still need to be approved through Whistler's Liquor Licensing Advisory Committee (LLAC) and municipal council.

Another change in the works applies to liquor primary establishments, which, as of next month, will be able to offer all-ages events, such as concerts and dances. The licence amendment fees will be eliminated and the approval process will be streamlined for applicants.

Resort stakeholders have been integral to pushing many of B.C.'s latest liquor policy reforms through, lobbying the province for years to update its legislation to align more closely with other Canadian provinces. Now, with 21 of the 73 planned updates already rolled out, Whistler has seen a number of changes it's pushed for come to fruition. John Grills, council's appointee to the LLAC, applauded Victoria for their efforts — even if they were long overdue.

"I think there's been more changes to liquor policy in the last three years that I've been a councillor than in the 30 years that I was a food and beverage operator," he laughed. "It's great to see. It really makes so much more sense for operators in a resort community like this."