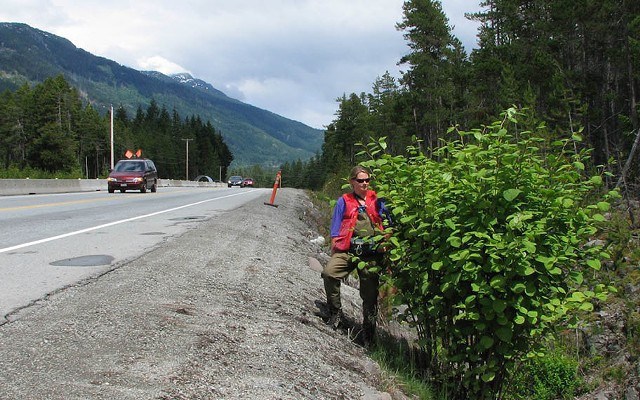 NOT IN OUR BACKYARD There are numerous ways to get involved during Invasive Species Action Month. Japanese knotweed, an invasive plant common to the Sea to Sky, is seen above on the side of Highway 99. file Photo

The provincial government has proclaimed June to be Invasive Species Action Month in an effort to raise awareness of the significant impact invasive plants and animals can have on B.C.'s ecosystems and economy.

"Everyone in B.C. has a stake in protecting our environment,' said B.C.'s Minister of Environment Mary Polak. "A big part of that goal is preventing the spread of harmful invasive species."

Victoria works closely with the Invasive Species Council of B.C., local government and community organizations to help prevent the introduction and spread of invasive species. In April, officials announced $1.7-million in grant funding towards that cause, which included $46,400 to the Sea to Sky Invasive Species Council (SSISC) for plant management and public outreach efforts.

These funds were in addition to the $735,000 already allocated by the Ministry of Forest, Lands and Natural Resource Operations for invasive plant control across the province in 2015-16, as well as the $1.3 million granted by the Ministry of Transportation and Infrastructure earlier this year.

Executive director of the SSISC Clare Greenberg said this month's campaign is about more than just raising public awareness.

"It's an opportunity for all the different stakeholders who work on invasive plant management to band together and have a focused message," she said. "It's not just about raising awareness about invasives, it's also a call to action, so it's asking people to actually step up and help stop the spread of invasives."

Greenberg encouraged members of the public to consult the SSISC website (www.ssisc.info) for tips on identifying and removing various invasive species, or, better yet, to contact the non-profit so its field workers can remove the plants on their own.

The council has a long to-do list this summer with an expanded area to cover after the Squamish-Lillooet Regional District provided funding to the group for the first time in five years, Greenberg said.

"That means there's a whole lot of gaps we haven't been able to address that we'll be addressing this season," said Greenberg, including "hot spots" in the Pemberton Valley and areas of Crown land where some have illegal garden waste containing invasive plants.

The SSISC will also continue to focus on its program of eradicating troublesome species like knotweed, hogweed and yellow flag iris from wetlands and waterways in Whistler and Squamish.

Greenberg said the public has become more cognizant of the invasive species in their own backyards in recent years.

"Just based on how many phone calls we get from people asking for advice and wanting to know what they can do, I think awareness is definitely being raised," she said.

The SSISC will host three weed pulls throughout the Sea to Sky in the month of June, giving community members a chance to play a part in the management of invasive plants.

On June 6 at Rose Park in Squamish, the public was invited to help remove Himalayan blackberry. The second weed pull is set for June 13 at 11 a.m. in Whistler at Meadow Park, where volunteers will remove lamium and burdock. The final event is scheduled for June 17 at Pemberton's Arn Canal, starting at 3:30 p.m., to pull diffused knapweed.