'Legends of Whistler' look back on the resort's improbable past

Speaker series invited a dozen notable local figures to the stage over three events
Nov 3, 2019 12:30 AM By: Brandon Barrett 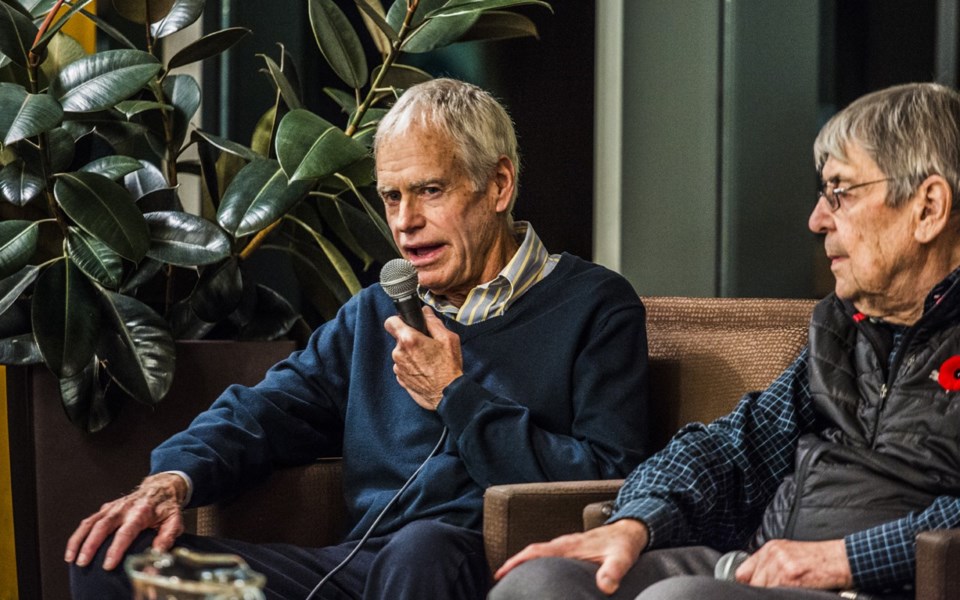 legends, live Hugh Smythe, left. and Peter Alder were two of the 12 local figures who took part in the Legends of Whistler Speaker Series last week. photo courtesy of the whistler museum

four local icons each representing a different era of Whistler's development shared the stage last week to regale the audience with stories stretching from the resort's 1960s opening to Vail Resorts' takeover of Whistler Blackcomb (WB).

The Legends of Whistler Speaker Series invited 12 local figures to reflect on the resort's past over the course of three separate events, each with a different theme.

What follows are some handpicked highlights from the hour-and-a-half talk.

On your first memory of skiing Whistler:

Alder: We were with [a skier] from Silver Star and he had one leg amputated below his knee, and the other one below his foot. He skied down and asked the ski patroller for a wrench, and she couldn't believe he wanted a wrench. She had one up at the shop ... and he pulled his pants down, repaired his leg, and tightened up the screws, and she fainted right there.

Smythe: [As a 19-year-old ski patroller for Whistler Mountain just days after it first opened in 1966] I shovelled for two hours that morning and then they started letting the public up. It was really snowing hard and the skiing, as Peter said, was not all that pleasant. It had only been open a week or two at that point and the moguls were as big as Volkswagens, and to ski from the top to the bottom was not that pleasant an experience ... but when you got back down to the T-bar on a sunny day and it's full of snow, there was nothing like it in the whole world.

On the stories from Whistler's early days:

Douglas: There was one name that came up over and over [while filming Whistler Blackcomb's 50th anniversary commemorative film], Dag Aabye, this sort of rake-thin Norwegian guy. He was the one putting down all the lines on the peak of Whistler before anyone. The lifts went up to the top of the T-bars and Dag would go up and ski Don't Miss and the Weekend Chutes and all these permanently closed areas, and he did that way before—20, 30 years before—the next person did it.

On the significance of skiing Dave Murray Downhill:

Murray: I remember racing downhill on the Dave Murray Downhill, my dad's run, and I was scared shitless going down the Sewer and Toilet Bowl. Growing up ski racing, I would always end on my dad's run, because I lived in Creekside ... My mom [three-time world champion freestyle skier Stephanie Sloan] and I would always meet after ski racing when I was eight or 10 years old, and we would race down my dad's run and she always beat me. Then I finally beat her [when I was around 12]—I thought that was pretty cool.

On the rivalry between Whistler and Blackcomb Mountains:

Douglas: People were dug in. When I got here [in 1988], it was like, 'Which mountain do you ski?' It was like a test. Which side? People wouldn't talk to each other from either side ... 'Whistler rocks and Blackcomb has 'em.' That was one of the first phrases I remember when I got here.

On the initial response to the Peak 2 Peak Gondola:

Murray: My mom said it was like we won the lottery. We got the highway and put Whistler on the map for what it is now. It bred Olympians.

There are so many athletes in this town who had a chance to compete on home soil.

Having the home crowd down there and hearing the crowd scream from the start gate was so eerie and amazing.

Smythe: The village was made for the Olympics ... The best time and the best event was the medal ceremony every evening. It was phenomenal, this international mosh pit.

On the relationship between Vail Resorts and the community of Whistler:

Alder: One of the things I really appreciate is that the original idea of the bed units and the growth, the Resort Municipality of Whistler has really kept these standards and I hope they can keep on doing it no matter if we have Vail as a partner, because as you know, over the years we have had several different companies involved in Whistler and B.C., from wherever. As long as the RMOW sticks to the basic formula they have adopted in the very beginning of bed units and growth, we'll be safe.

Smythe: It has become more difficult because a lot of the [WB staff] have either left or moved to Broomfield. The decisions are all made there and I think that's the challenge: the decision making has kind of left Whistler and gone to Broomfield. It makes it difficult. It isn't that they're bad people, it's just different ... I'm not sure what the answer is. They know the business, they're very, very successful, the Epic Pass is the elephant in the room, the most amazing lift ticket product in the world and it will bring people from everywhere in the world, so from an economic perspective, it's great.

Douglas: It's a tough one for me. I had a contract with Whistler Blackcomb for 20 years until Vail Resorts arrived and quickly ended it. That was a little bit of a blow after being a guy on the inside who was really excited to show up and work in the various departments from over the years. It had a real community feeling and that's what I liked; I could corner [former Whistler Blackcomb CEO Dave] Brownlie at the hockey rink or the soccer pitch.

What I do like to see, if I'm going to stay positive here, is Vail adopting some of the great things we did at WB. [Senior planning and environment manager] Arthur De Jong ... and the legacy of environmental stewardship over the past 20 years has now expanded to the portfolio of Vail with their Epic Promise.