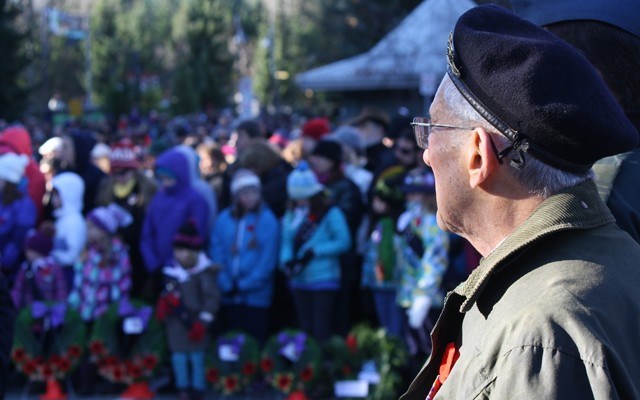 The Whistler community and visitors are once again invited to remember Canada's veterans at the Remembrance Day ceremony on Wednesday, November 11 at the cenotaph on Village Gate Blvd.

This year's ceremony will be largely unchanged from previous years, and will include the veterans' parade down Village Gate Blvd. to the cenotaph, songs from the Whistler Children's Chorus, wreath presentations and two minutes of silence.

"A century ago in 1915, Lieutenant-Colonel Dr. John McCrae penned his iconic Canadian battlefield poem, In Flanders Fields after the death of one of his closest friends," Bucholz said.

"Without question, In Flanders Fields is one of our country's most remembered and oft repeated pieces of literature. Across the century, In Flanders Fields has been a beacon of remembrance for Canadians as we acknowledge the sacrifice and the loss of the more than 116,000 Canadians in war and in peacekeeping."

"I've been attending for probably 30 years, and it's always remarkable to me just how the community really does come together, and has done right from the very beginning to mark this day," she said.