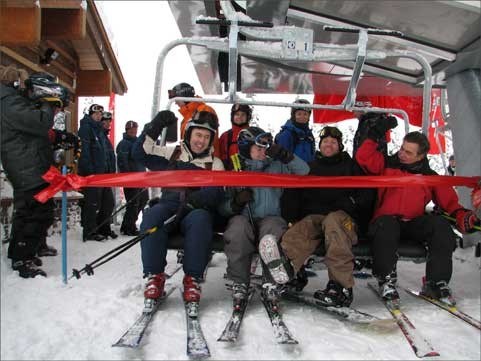 With classical music playing and ox bell clanging, Whistler-Blackcomb launched the Symphony Express chair Saturday just after 11 a.m. — improving access to a 1,000-plus acre area that will in the future be known as Symphony Amphitheatre.

All of the terrain was within ski area boundaries in the past, but could only be accessed by skiers and boarders willing to hike out.

Although there were a few delays getting the alpine open as a result of the heavy snowfall — 61 cm on Thursday and Friday — Dave Brownlie, chief operating officer enjoyed every part of the launch.

“You know what, this is unbelievable — not just for Whistler-Blackcomb, but for the community,” he said. “We’re excited about the new terrain and possibilities this opens up, and by the response from skiers and boarders.

“I know we’ve had a few challenges in the last couple of years as a town, but it’s nice to feel that the excitement is back along with the snow. This is really about the future.”

Asked if he knew what his first run was going to be, Brownlie shrugged.

“I don’t know yet,” he said. “I’m just going to go up there and figure that out from the chair. I can tell you it’s not going to be a groomer.”

To celebrate the opening of the lift, senior vice president of operations Doug Forseth rang a heavy brass ox bell given to the mountain by Doppelmayr, the company that provided the towers and driver for the $9.2 million chairlift.

“It’s a tradition Doppelmayr started in Austria, every lift has its own bell, and we wanted to launch this chair right,” said Forseth.

The first two chairs were filled with the winners from Whistler-Blackcomb’s golden ticket contest. For several weeks before the opening of Symphony Whistler-Blackcomb employees dressed as symphony conductors roamed around Whistler Mountain giving away golden scratch tickets. Eight of the tickets got the recipients front row seats.

The first foursome up Symphony was Paul Munnis, Adrienne Turcotte, Graham Kehoe and Marty Jenkins, all of Vancouver.

Munnis called riding the first chair “an experience of a lifetime, it’s so rare to be the first to get to do anything,” he said. He said he had a vague idea what his first run was going to be. “I’m just going to go and find some powder, which shouldn’t be too hard today.”

Turcotte, a snowboarder, had the same general plan for her descent, and was also blown away to find herself on the lead chair.

“It’s pretty lucky to win the contest,” she said. “I’m pretty excited to try some new terrain, because I grew up skiing here, and know the mountains so well. It’s a whole new area to explore.”

Kehoe, also a snowboarder, had high praise for the Whistler-Blackcomb staff for all the work they’ve done. Unlike the other golden ticket winners, however, he knew exactly where he was going off the lift.

Jenkins, a long-time Whistler-Blackcomb skier, also had a run picked out.

“I’ll probably hit Staccato straight off, I just like the sound of it,” he said. “I have been preparing for this moment for 35 years I’ve been skiing at Whistler. Actually, that sounds bad — better make that 25 years.”

The Symphony Express Chair is a high-speed quad that runs from an area below Burnt Stew Trail to the peak of Piccolo. Although the view was obscured by the snow and clouds on opening day, the view from the backside on Sunday included the Cheakamus Lake area of Garibaldi Provincial Park.

Several new runs were cut for the lift, with an emphasis on glading and keeping the area as natural as possible. The tower pads were installed over the snow this past spring to minimize the level of disturbance on the high alpine environment.