Fitness centre expansion on track for April opening
Dec 13, 2019 5:00 AM By: Braden Dupuis 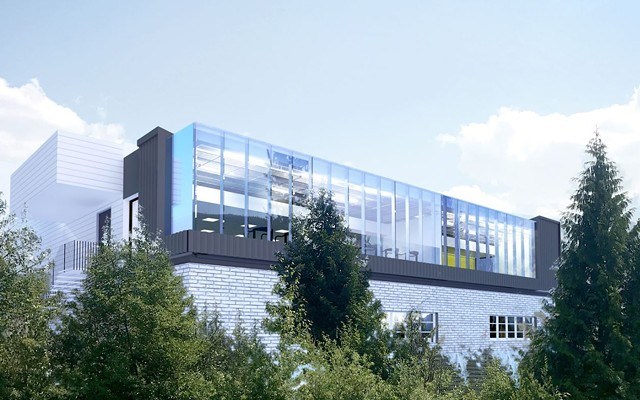 A rendering of the proposed expansion to Meadow Park Sports Centre's fitness centre. Image courtesy of the Resort Municipality of Whistler.

THOUGH THE FITNESS centre expansion project at the Meadow Park Sports Centre (MPSC) is "on time and on budget," according to the Resort Municipality of Whistler, the busy recreational facility is still struggling with lifeguard shortages—and some unrelated technical problems to boot.

The steam room, sauna and hot tub have all seen closures in recent weeks due to unrelated issues, said Mayor Jack Crompton.

"The steam room [is] closed for approximately three weeks as a result of a broken steam generator, which is being rebuilt by the manufacturer," Crompton said, adding that the steam room is expected to re-open on Dec. 16.

"The rebuild takes approximately half the time of ordering a new generator, [which] would take six weeks. Steam generators are customized for each facility so it is not just something you can purchase off the shelf."

While both the sauna and hot tub are operating again as of Dec. 13, both saw brief closures last week as well.

The sauna was out of order from Dec. 7 to 11 after some electrical elements were damaged, likely as a result of people pouring water over the rocks above the elements, Crompton said.

MPSC maintenance had spare parts on hand, but had to wait for an electrician and a plumber to install them, Crompton said, adding that the repair is covered under the MPSC's operational budget.

The hot tub, meanwhile, was closed after water samples showed high levels of "total dissolved solids," which occurs when there are "heavy bather loads," according to an RMOW spokesperson.

The hot tub was dumped and refilled, and is back up and operating.

But an ongoing lifeguard shortage—despite the addition of six new part-time lifeguards—means modified pool hours will continue for the time being (find full details at www.whistler.ca/culture-recreation/facilities/meadow-park-sports-centre/notices).

"We're working with the B.C. Lifesaving Society and we're encouraged to learn about a new procedure that will allow pool lifeguard certifications from Canada, Australia and the U.K. to be more transferable," Crompton said, though he couldn't say when that change might happen.

"We are also looking at options to lower the costs of any lifeguard-related certification courses in the new year."

The fitness centre project—which includes expansion of the cardio room and the addition of a stretching room—is on track to be completed by April.

In June, Whistler council awarded a contract for the work in the amount of $1.4 million to TM Builders Inc., the only firm to submit a bid, in a split vote (see Pique, June 13, 2019).

The project is also being boosted by an anonymous $400,000 donation.

"Meadow Park is an extremely popular amenity that gets lots of use," Crompton said.

"Our community would like to see it open as much as possible, and we're responding and working hard to see that happen."