Wednesday's lightning storm is credited with starting two fires on Whistler Mountain, both of which were handled by mountain staff before they could spread.
Jul 27, 2012 5:30 AM By: Andrew Mitchell 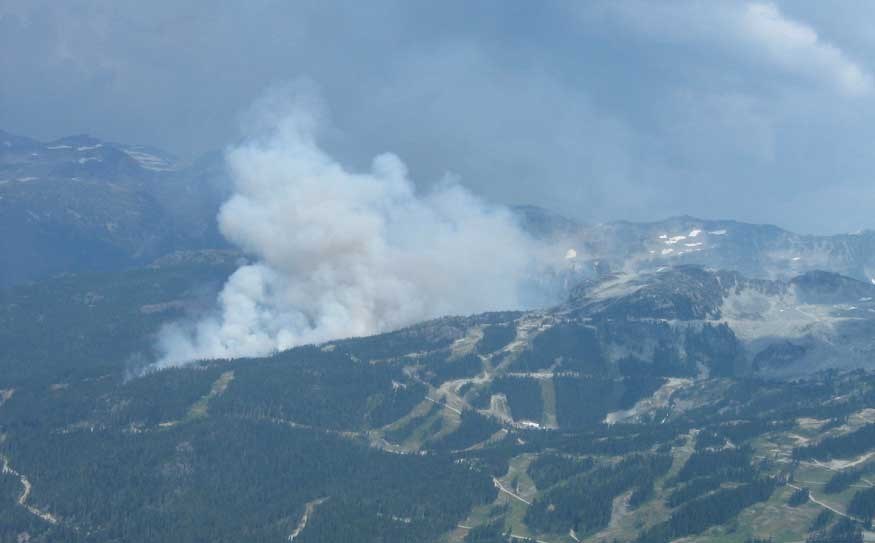 The 2009 wildfire on Blackcomb Mountain, also started by lightning.

Wednesday's lightning storm is credited with starting two fires on Whistler Mountain, both of which were handled by mountain staff before they could spread.

One of the fires was located in the Khyber area outside of the resort's operational boundaries, which burnt out on its own. The other happened in the Tower 28 area under the Whistler Village Gondola, and was put out by Whistler Blackcomb staff. Whistler Fire Rescue services was notified about the fires.

According to Whistler Blackcomb, 90 per cent of staff are trained fire responders and there are fire boxes on both Whistler and Blackcomb mountains with full sets of equipment.

The thunderstorm moved through the area on the afternoon of July 25. For safety reasons, once lightning was confirmed within a 20km radius, Whistler Blackcomb off-loaded chairlifts and moved guests indoors while the storm passed through, and glacier summer camp operations were suspended.

Once the storm had moved away, lift operations reopened at 4:30 p.m. to download guests. The Whistler Mountain Bike Park also reopened to the public.

A lightning strike in August 2009 was responsible for the large burn area on the flank of Blackcomb Mountain that engulfed the Arthur's Choice and Outer Limits gladed runs, and an out-of-bounds area known as CBC trees. Fire crews battling blazes near Pemberton attended, and battled the blaze for over a week before it could be classified as extinguished. That wildfire measured roughly 30 hectares in total area.