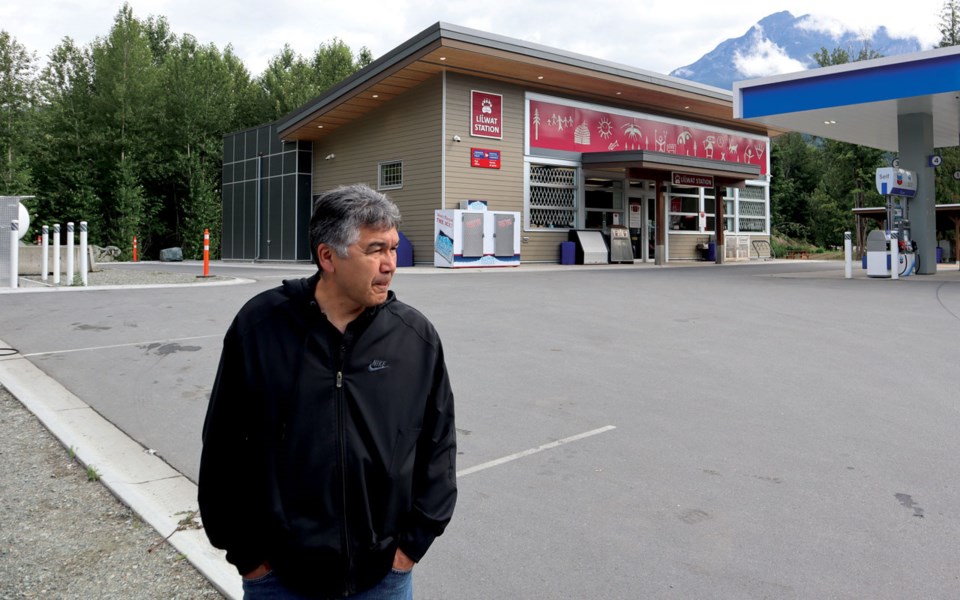 FUELLED UP Lil’wat Nation Chief Dean Nelson at the new Lil’wat Gas Station and post office, which are part of the Lil’wat Business Group’s holdings. File photo by Braden Dupuis

The Lil’wat Business Group has been bestowed an impressive honour.

On Oct. 5, the BC Achievement Foundation announced that the organization was one of eight Indigenous Business Award winners, as the group won Community-Owned Business of the Year (Two or More Entities).

CEO Kerry Mehaffey said the award is a major feather in the cap for the group.

“It means a huge amount, just to be recognized across the province as a leader in business economic development and it’s a testament to our community leadership,” he said.

Mehaffey said that the past year has been a successful one for the business, with the gas station and post office opening in September 2019 after 20 years of planning, even in the face of the ongoing COVID-19 pandemic.

“It’s a testament to that long-term vision and tenacity of leadership of the community,” he said of the gas station opening. “The biggest challenge [during COVID] is a loss of our ability to plan into the future. Some of our retail locations had strong years as more people from the community stay home to shop directly in their communities, and traffic volumes have still been high past the new gas station site.”

Mehaffey added that the forestry division, meanwhile, has seen no change in demand or workflow.

While Mehaffey hasn’t received any specific indication from the BC Achievement Foundation about what put the group over the top, the foundation explained its principles in a release.

“Each year, the Indigenous Business Award program recognizes Indigenous enterprises that create and expand opportunities, relationships and communities, all with the goal of a more inclusive and prosperous future,” chair Anne Giardini said in a release. “I am particularly inspired by this year’s Awardees. All of them exemplify resilience and innovation during this time of challenges. This year’s Awardees demonstrate that integrating the practices of the past with the economies of the future benefits us all.”

Lil’wat Business Group has supported several community projects over the years, and in terms of recent initiatives, Mehaffey is proudest of the language immersion classroom at Xet’ólacw Community School.

As well, Mehaffey noted that the group has acquired parcels of land near the reserve, though there is no concrete plan for them at this time.

Also on the horizon is the long-planned development of a gas station in Whistler’s Function Junction, which he hopes to get underway in 2021.

With no award ceremony this year because of the pandemic, Lil’wat Business Group will instead be recognized, along with the other winners, in a social media campaign in November. Mehaffey said the BC Achievement Foundation recently sent a videographer for a community tour, interviews with Chief Dean Nelson, Councillor Maxine Bruce and himself to get a sense of the organization’s work in the community.