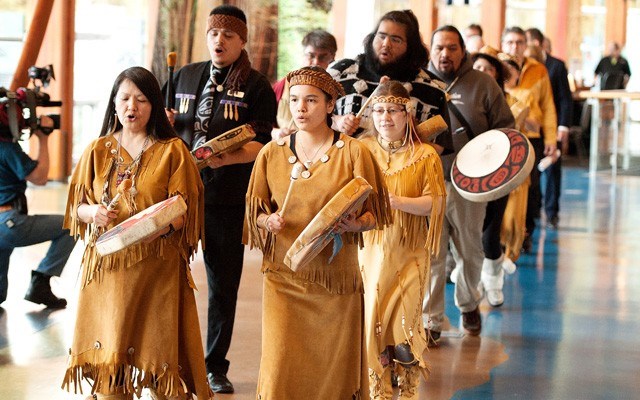 An historic agreement between Whistler Blackcomb (WB) and the Lil'wat and Squamish First Nations, which includes revenue sharing, is a meaningful funding and development step for both communities.

Getting it in place was also key to securing provincial approval for Whistler Blackcomb's Master Plan Agreement first outlined in 2013, and helps pave the way for the $345-million Renaissance development plan.

"This is a significant milestone for Whistler Blackcomb and our local communities as it provides us with the long-term certainty for the capital investment required to maintain our position as a premier mountain resort destination in the world," said WB's chief operating officer, Dave Brownlie.

Said Lil'wat Chief Dean Nelson: "Líl'wat Nation being recognized as a respected partner in the Master Development Agreement negotiations demonstrates the progress the Nation has made in our relationships with Whistler Blackcomb and the province.

"By signing these 60-year agreements we are ensuring that Líl'wat Nation realizes long-term economic benefits through its stakeholder position in development undertaken by Whistler Blackcomb on unceded Líl'wat territory.

"We have a lot of basic needs, like housing, and renovations and infrastructure... This will allow contracting opportunities and employment opportunities, and I think real partnership... It's not just menial help — it's actually grooming people to be managers. That's what I'd like to see."

The deal between the Lil'wat and Squamish First Nations, on whose territories WB operates, was sealed at a Feb. 24 ceremony at the Squamish Lil'wat Cultural Centre that opened with Lil'wat drummers and finished with a gift exchange between representatives of the First Nations, WB, the province and the Resort Municipality of Whistler (RMOW).

The agreement was about eight years in the making — something Brownlie said was an exercise in cooperation.

"What I would say was so great was every time we hit a crossroads, it was the ability to pick up the phone and get a meeting, have a discussion, open the dialogue, figure out a path forward. And that was so positive," he said.

"Whether it's Renaissance or other things, it definitely allows us to move forward."

As well, WB, the province of B.C., the RMOW and both First Nations have a Memorandum of Agreement that will outline how all affected parties will work together to move forward. The details and costs associated with the agreement are confidential, though opportunities for revenue sharing, employment, recreation, and education are all part of the agreement.

"...It's a recognition that our people have been here since time immemorial and it's through that recognition that we're going to share in the prosperity of WB and that we will work together in terms of the build-out of this great resort, this great destination," said Squamish Nation spokesman Chris Lewis.

"And we're no longer going to be invisible on our traditional territories."

Nelson added that the timing was right to pursue a partnership with WB, and the opportunity to say yes to future revenues.

"We don't have real jobs. We settle for labour all the time," he said. "We were always hesitant as far as government goes. Then the attitudes changed in the province about agreements and acknowledgement and reconciliation. I would say they see us as people, like anyone else. And that's really human."

The master plans can be seen here: www2.gov.bc.ca/gov/content/industry/natural-resource-use/resort-development/proposed-approved-resort-master-plans/list-of-approved-plans.