Dozens of recommendations on horizon after wholesale endorsement from province
Feb 5, 2014 8:00 PM By: Alison Taylor 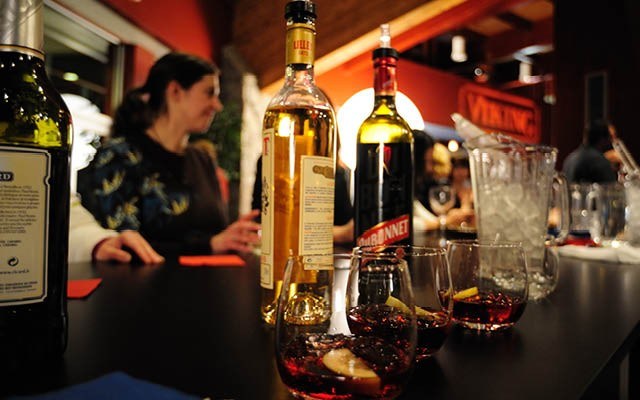 PASS THE TEQUILA Liquor reform could allow visiting wineries at Cornucopia, Whistler's annual food and wine festival, to see their wine on site in the future. Photo BY Steve Rogers courtesy of Tourism Whistler

Tourism Whistler's president and CEO, Barrett Fisher, is hailing the sweeping list of new liquor rules as a boon for tourism that will benefit Whistler.

"We're delighted that we're moving into the 21st century as far as liquor regulation," said Fisher, in the wake of the recently released B.C. Liquor Policy Review Final Report and its 73 recommendations for liquor law reform.

"We recognize that health, safety and social responsibility are critical, but from a tourism perspective, this report clearly has embraced tourism and recognizes that with our liquor offerings, we need to be competitive, we need to be convenient, and it needs to be relevant.

"And so we're very pleased that there are a dozen key recommendations that will be a direct benefit here in Whistler."

Perhaps one of the biggest boons in Whistler is that festivals and events are set to get a little more relaxed and patron- friendly.

Several recommendations focus on relaxing the licensing around special occasions including the idea of eliminating "beer gardens" and allowing "whole site licensing for public events."

That's good news for Whistler, which has been pouring millions into its ever-growing and evolving festival and events line-up.

"I think when we saw GranFondo (test case last year) that's exactly the environment we want to see where parents and friends are enjoying themselves without this cattle corral situation we've had for years," said John Grills, the council representative on the Liquor License Advisory Committee.

The recommendations also address streamlining the process for Special Occasion Licenses (SOL's) and cutting down on the red tape.

For GranFondo's co-founder Neil McKinnon, who has been hosting his Vancouver to Whistler bike race every September since 2010, the move is a welcome change.

"I think Suzanne Anton (B.C.'s minister of justice and attorney general) and the provincial government have shown great leadership in providing just common sense to the whole notion of liquor and people," said McKinnon.

"If you want events to succeed, give them the basic tools to let them do that and I think celebrating with a beer after an athletic achievement is reasonable and I'm glad that we've finally joined probably the rest of the world in letting our participants do that."

Whistler's food and wine festival, Cornucopia will also benefit with the ability for wineries, showcasing their wine, to sell it too under the recommendations that allows temporary liquor stores at festivals.

"We would then be more successful at attracting wineries," said Fisher.

The new SOL recommendations are just what Whistler has been lobbying for these past two years and just a portion of the overall changes on the horizon.

"Those were all part of our recommendation at UBCM in 2012 when we asked for changes to be made to the whole festival and event licensing on the SOL's," explained Grills.

There could be some push back in Whistler over one recommendation, said Grills, that would allow restaurants to serve just liquor and no food if patrons do not wish to eat.

"I know that will be a contentious one with the bar owners in town," he said.

Overall, though, he was pleased to see the recommendations endorsed by the provincial government last week, although he cautioned that it's still business as usual for the time being as most of the recommendations either require changes to policy, regulations, legislation or a combination of all three.

"We as a community will still need to work through some of the recommendations, but from our perspective we believe that it's important that we're always customer driven," added Fisher.

When asked if the changes were good for Whistler, Stephen Webb, chair of the Whistler Hotel Association and general manager of the Hilton, said in general they are a welcome change.

"They'll be good for the consumers who have challenges with some of the finer points, for example, not being able to carry your beer from a restaurant to a bar that's in the same space," he said. "A lot of the changes are quite common sense."

Hotel and resort patrons for example will be able to carry liquor throughout designated areas of the hotel, allowing a guest to carry a glass of wine from check-in to their room.

Another recommendation calls for a more streamlined and time-sensitive applications process to allow facilities such as ski hills and golf courses to temporarily extend their licensed area to another part of the property, such as expanding a patio near a gondola lift.

In his report, which was the culmination of 65 stakeholder meetings and thousands of website comments and emails, John Yap, parliamentary secretary to the Attorney General and minister of justice for liquor policy reform, wrote:

"I must say that although I anticipated strong public interest in this review, I was surprised, very impressed and extremely encouraged by the level of engagement in and quality of submissions to the process.

"The dominant theme that emerged in both the review and this report is developing a balanced approach to protecting public health and safety, providing more convenience for consumers and streamlining regulations for the industry."

B.C.'s $1 billion liquor industry is one of the leading contributors to tourism — more than 800,000 visitors annually spend money related to the wine industry. That, pointed out Yap in his report, is more than came to Vancouver for the 2010 Olympic Games.

"At the end of the day is the world going to change?" asked Grills. "No. I think you're just going to find that it's allowing our consumers and our guests to have a little more flexibility in their choices and most likely more in line with what they're use to at home."

-With files from John French