Local cancer charity set to expand thanks to donation 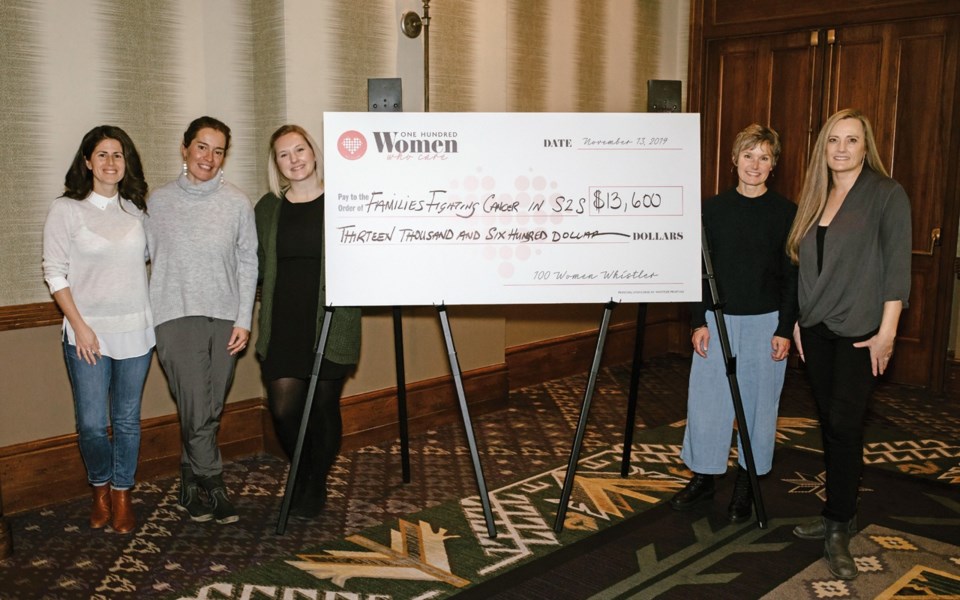 A small but mighty charity dedicated to supporting Sea to Sky families affected by cancer just got a big boost.

Families Fighting Cancer in The Sea To Sky (FFCSS) recently learned that it has been awarded $13,700 from 100 Women Who Care Whistler, a community organization that quarterly donates $100 from each member to a local non-profit.

The money will be used to allow FFCSS, which has no paid staff, to widen the net of people it is able to support.

Up until now, FFCSS has focused on helping parents or dependent children living with cancer.

The donation will allow the organization to now support all individuals who have cancer and live in the corridor.

Over the last five years, FFCSS has been faced with the "heart-wrenching" task of having to turn away a couple of seniors and individuals who didn't meet their previous criteria, explained Lisa Geddes, who co-founded FFCSS along with Michelle Williamson back in 2015.

"We always had a dream of being able to expand our mandate, and with this 100 Women Who Care money, we're now able to set up a fund for two years to [offer an expanded] program."

Geddes, whose family has been affected by cancer, said the funding the charity provides is an important source of support for families.

"When you're going through something like cancer, sometimes it can feel like you're all on your own," said Geddes.

"When I went through it, with our son, just knowing you've got some support out there in the community is fantastic; you're not alone."

With the vast majority of cancer treatment requiring travel to Vancouver, FFCSS helps out with expenses associated with treatment or palliative care, as well as through the first year of post-treatment recovery.

In the last five years, the organization has supported over 30 parents or dependent children living with cancer. It currently supports them with up to $3,000, up from $2,000 in previous years.

FFCSS runs in partnership with Sea to Sky Community Services Society, and Geddes said the charity's lean nature means that donated money goes directly to those in need.

"I think we're extremely unique in that we are 100-per-cent volunteer run," said Geddes.

"We have no paid staff, so 99 per cent of every single dollar that is donated goes directly to help our clients."

Based on the idea of a "giving circle," 100 Women Whistler brings together women who want to amplify their charitable gifts.

Each woman donates $100 a quarter, which is given away to a non-profit that they vote on.

The group (which actually boasts 137 members at the moment) heard from advocates for three charities—the Association of Whistler Area Residents for the Environment, the Whistler Adaptive Sports Program, and FFCSS—at a Nov. 13 reception at the Fairmont Chateau Whistler, explained 100 Women Who Care Whistler founder Ashlie Girvan.

"Everybody's been touched by cancer in some way at some point," said Girvan.