Whistler's Zero Ceiling Society was recently presented with a cheque for almost $15,000 from the Citizens Bank of Canada.
Mar 12, 2004 4:17 AM By: Pique Newsmagazine Staff 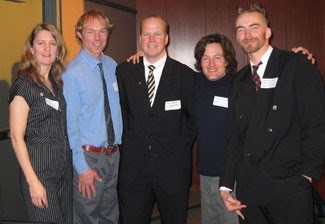 Whistler's Zero Ceiling Society was recently presented with a cheque for almost $15,000 from the Citizens Bank of Canada.

The local organization, which brings at-risk youth from Vancouver to Whistler and puts them through Whistler-Blackcomb's Snowboard Instructor Program, was chosen from 130 charities across Canada.

"It was wonderful to receive this award from the Citizens Bank and a very proud experience to be honoured alongside the other seven fantastic organizations," said Chris Winter, Zero Ceiling's founder and president.

Some of the other charitable organizations that were chosen to share in the funds were the David Suzuki Foundation, the Western Canada Wilderness Committee and Victoria Habitat for Humanity.

Zero Ceiling's sizeable donation will go into the Community Foundation of Whistler's Zero Ceiling Endowment Fund. A portion of the money will also go towards the Snowboard Instructor Program and Peer Mentorship Program.

"Receiving this award is enabling us to invest in our future so Zero Ceiling will continue to make a difference in the lives of at-risk youth for many years to come," said Joanna Woods, Zero Ceiling's program manager.

Roughly 30 at-risk youth have gone through the Zero Ceiling program to date. Many have turned their lives around after the experience.

The Snowboard Instructor Program takes the youths through a one-week intensive training program and if they pass a Whistler-Blackcomb interview and evaluation they have the chance to live and work in Whistler as snowboard instructors.

The Citizens Bank of Canada is a branchless bank that was formed by the VanCity credit union.

The money in the Shared Interest Fund was raised through the bank's annual corporate donations.