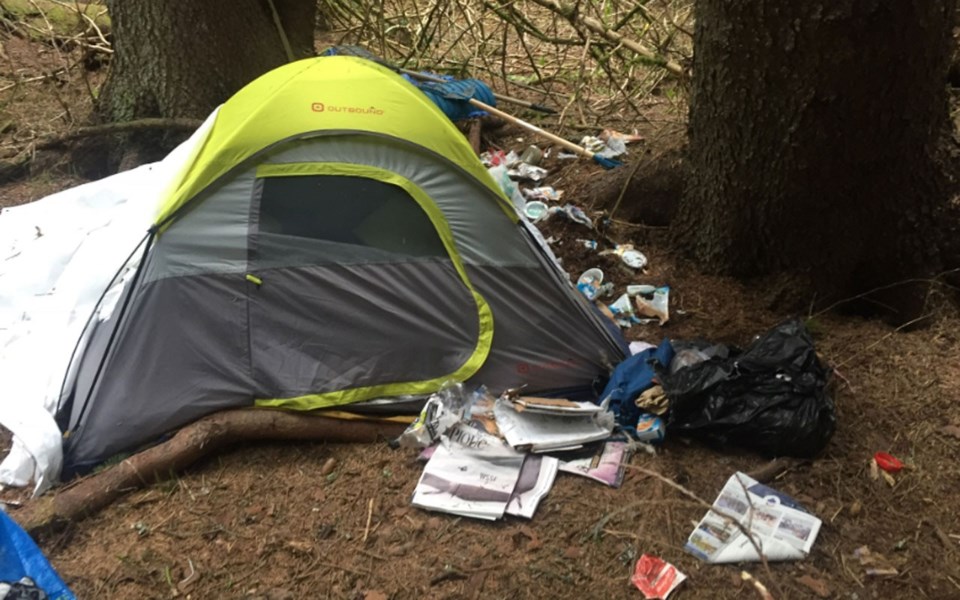 WASTE MANAGEMENT Waste removal company 50 North was contracted by the municipality to remove trash from the Lost Lake area. Over the course of two days, workers removed almost a ton of garbage—much of it from illegal campsites that have popped up in the area. Photo submitted

Close to half a ton of trash* was removed from Lost Lake Park last week, much of it from illegal campsites that have popped up in the area, according to a local waste removal company.

Adrian Moran, co-owner of 50 North Exterior Property Detailing, said his company was contracted by the Resort Municipality of Whistler (RMOW) to cart out garbage from the forest around Lost Lake, after several recent bear sightings in the area.

Workers removed approximately 450 kilograms of trash in all and, in what is yet another side effect of Whistler's housing crisis, counted at least nine illegal campsites that appeared to be active—along with remnants of several older sites that looked to be abandoned.

Moran said employees found everything from food waste, to used feminine hygiene products, and even an unmarked pill bottle containing prescription sedatives. He noted that bylaw officers spoke with one individual who said he had been camping at the makeshift site for several months, utilizing an intricate pulley-and-tarp system to keep dry in the winter.

Moran was taken aback by just how many campsites there were seemingly hidden in plain view, only a short walk from the village. "You hear the stories of a few people sleeping out in the woods and whatnot," he said. "But being so close to all the action, and no one even knowing they were right there (was a surprise)."

So far this year, the municipality has received 11 complaints about people living in vehicles, and seven related to camping or squatting in tents illegally. Enforcement is driven by public complaints and patrols, and bylaw officers have a zero-tolerance policy towards wildlife attractants. The fine for attracting wildlife is $200.

Whistler Bylaw Services has issued 72 tickets for camping in vehicles in undesignated areas, compared to 119 from January to June 2017, and 113 over the same period the year prior. Camping is not permitted on Whistler's roads, in parks or parking lots, and this includes sleeping in vehicles overnight. The fine for illegal camping is $75.

"I am concerned about it, particularly because of two reasons, the same reasons that we get all the time: Wildfire hazards and bear attractants," said Mayor Nancy Wilhelm-Morden. "There is some illegal camping that I understand the RCMP and bylaw are looking at right now, so yeah, we just really want to ensure that people know where they can camp." Camping is permitted in designated areas such as the Riverside Resort, Whistler RV Park and Campground, and the Cal-Cheak recreation site, and at Nairn Falls. Illegal camping gained added attention locally last year as some in the community struggled to find accommodation during Whistler's housing shortage. While the number of municipal tickets issued annually for illegal camping has remained steady over the past few years, more and more people have ventured beyond Whistler's boundaries, where they can camp legally on vacant provincial Crown lands for up to 14 days at a time, provided they are not breaking any laws.

Concerns from local and provincial officials got to the point last summer that a meeting was convened between the Conservation Officer Service and the Ministry of Forests, Lands and Natural Resource Operations (MFLNRO)—whose natural resource officers are tasked with enforcement on Crown land—to discuss ways to combat illegal camping. A ministry spokesperson said over a dozen trespassing tickets were handed out last year "to address emerging problems in high-use camping zones" in the Whistler area. "We encourage people to camp at designated recreation sites or provincial parks," said a ministry spokesperson in an email. "While people can camp on Crown land for up to 14 days, we ask people do so in a safe and responsible manner and pack out whatever they pack in."

Due to a conversion error, an earlier version of this article incorrectly stated that close to a ton of trash was removed from the Lost Lake area. Weighing in at 450 kilograms, the amount of garbage removed was closer to half a ton.