Whistler community, and beyond, quietly manoeuveres an 11th birthday to remember for Mischa Arnott
Feb 14, 2018 5:01 PM By: Alison Taylor 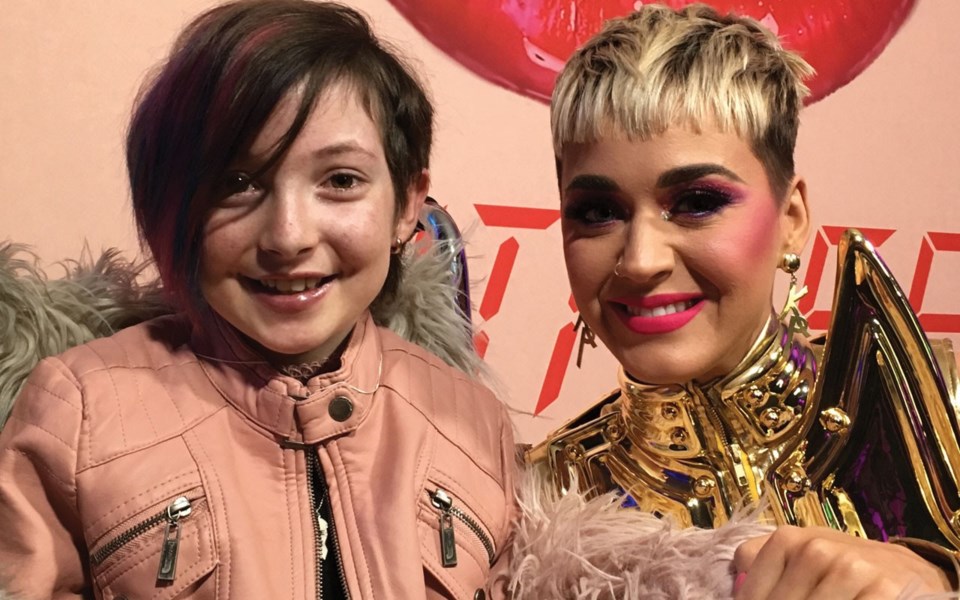 The after effects of meeting one of the world's biggest popstars haven't worn thin on Mischa Arnott.

The evidence is everywhere: the multi-coloured streaks glinting on the right side of her hair, the black concert T-shirt under her hoodie, and perhaps most tellingly, the way her face lights up when she talks about her 25-minute one-on-one meeting with Katy Perry, minutes before the pop icon stepped onto the stage in Vancouver Monday, Feb. 5.

"She was really nice," said the 11-year-old with a secret smile and quiet chatter, eager to once again relive the memory of Perry riding into a private room at Rogers Arena on a pink-wheeled scooter, in a luminous gold outfit. Perry also came with ready hugs.

If there was ever any doubt about the healing power of music, Mischa's mom, Dr. Renata Lewis, has now seen it work first hand.

"Because of (the) hugely significant medical challenges that (Mischa) has faced, and she's still continuing to face, it meant so much for her just to be a kid that evening — just to let go, and have fun and... feel free, honestly," said Lewis of watching her daughter at the concert in her pink leather jacket and rock-star hair. Surrounded by her friends, Mischa was transported away from her daily struggle thanks to the music.

"It was amazing," said Lewis simply.

The experience gave Mischa a momentary respite: no time or thought to the constant doctor's appointments or hospital stays.

The idea of the evening was born during one of Mischa's frequent visits to the Whistler Health Care Centre where the pre-teen chatted about one of her favourite musicians with nurse Lynda Cowan.

"We did it because Mischa is such a wonderful girl, an amazing friend, and we want the best for her every day," said Whistler's Dr. Fern von der Porten.

Do It for the Love, a wish-granting non-profit organization with some local connections, answered the call; the organization was founded by Spearhead's Michael Franti, who often plays in Whistler, and wife Sara Agah Franti. Its vision is to bring "people living with life-threatening illnesses, children with severe challenges and wounded veterans to live concerts. Through the healing power of music, our goal is to inspire joy, hope and lasting celebratory memories in the face of severe illness or trauma."

Do it for the Love has another Whistler connection — Joey and Jessica Houssian, whose father Joe Houssian developed Blackcomb Mountain through his company Intrawest, are also involved with the non-profit.

It wasn't long before The Houssian Foundation donated its box at Rogers Arena for a party of 14.

It's still a mystery, however, how Mischa came to be quietly holding hands and talking to Katy Perry as thousands of fans waited for the singer to take the stage. This was three days before her 11th birthday — a birthday she'll never forget.

"It was way beyond what we thought," said Lewis. "You think the concert would have been amazing enough."