‘We really all just need to break the silence,’ says First Nations organizer
Jun 3, 2020 1:00 AM By: Brandon Barrett 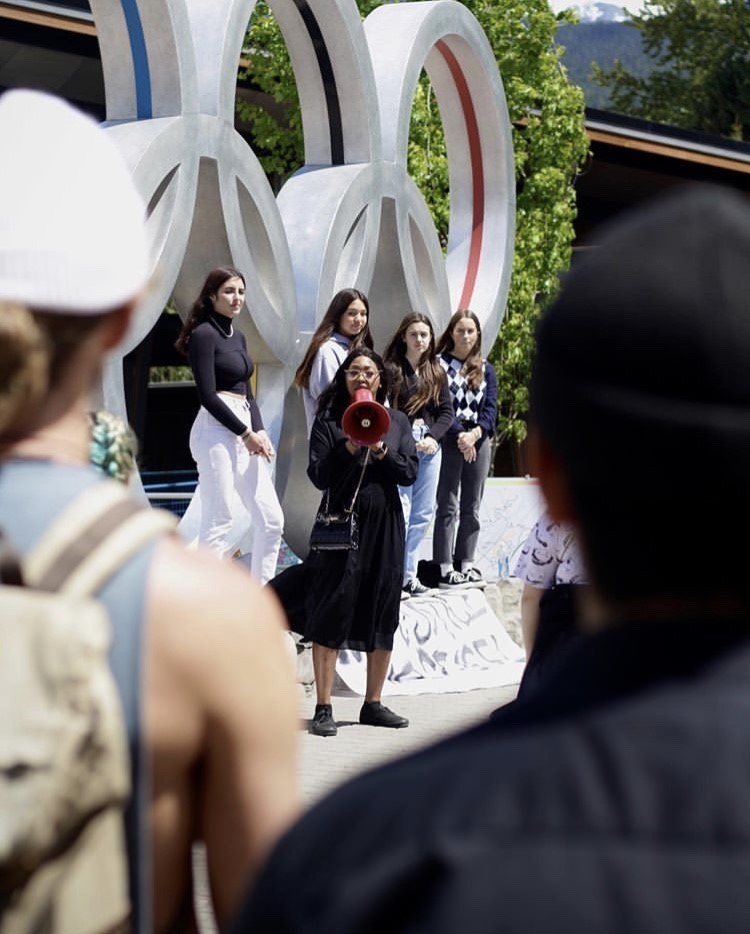 Roughly 150 Whistlerites came out to a rally in honour of George Floyd and other victims of racism and police brutality on June 1. Photo by Iris Smith

For 15-year-old Charlize Littlelight, the discrimination she’s experienced growing up as a First Nations woman in the Sea to Sky hasn’t taken the form of the kind of overt, blatant acts of racism we often see splashed on the news. But that doesn’t mean it hasn’t affected her.

“I’ve never really experienced anything too crazy but it’s definitely something that I feel and I think about a lot every day,” said Littlelight, who is part Lil’wat and part Tsuut’ina. “I have a pretty supportive community, but just growing up in my generation, there were so many jokes and stereotypes. It’s definitely something I face on a daily [basis]. It just becomes a normal thing and people tell you how to laugh it off and they weren’t serious about it. At the end of the day, it’s all I think about and it’s in my head. It’s not a good feeling. It just makes you feel so small.”

A Grade 10 student at Pemberton Secondary School, Littlelight was one of four local teens who organized the June 1 Whistler rally—alongside Kaiya Nixon, Jaya Guibert and Danika Boucher, who first had the idea to hold the rally—in memory of George Floyd, whose death at the hands of Minneapolis police last week has sparked protests across North America, and other victims of racism and police brutality.

Littlelight was also one of several people who addressed the roughly 150 attendees gathered at Olympic Plaza on Monday afternoon.

“It’s just important that First Nations people can talk,” she added. “We can relate to the same issues, it’s just not a lot of it is out there. We’re very quiet on it and it’s very buried underneath everything. It’s very deep and it’s not portrayed by the public or anything, so I just wanted to speak on that because we do face similar experiences with police brutality.”

More than one-third of the people shot to death by RCMP officers between 2007 and 2017 were Indigenous, according to a police document obtained last year by The Globe and Mail. And despite only representing 4.9 per cent of the country’s population, Indigenous people make up more than 30 per cent of all inmates in Canadian prisons.

Ashley Knapton, 15, said she was initially hesitant to attend the rally, given she is the daughter of Whistler RCMP Sgt. Rob Knapton—but eventually changed her mind.

“I was a little bit worried about that and what people would think … but I know my dad and I know he would never be that type of police [officer]. I know he’s there to help, so I pushed it aside and thought, ‘It’s not going to change what I want to help with.’ I can still do what’s right and try to make a difference.”

Having a First Nations voice at the rally was essential, said 16-year-old Nixon—especially with Whistler’s population being predominantly white.

According to the 2016 census, 11.4 per cent of Whistler’s population is made up of visible minorities, below both the Canadian (22.3 per cent) and British Columbian (30.3 per cent) rates.

For Whistlerites looking to be allies in the fight against racism, Littlelight had a simple piece of advice: educate yourself.

“You need to look at other people’s views and read other things that are made by people of colour—because you’ll never truly understand what it’s like to be in our shoes,” she said.

“Everybody needs to be part of it … We really all just need to break the silence. I know that’s a scary thing, but it’s what we need to do. It’s way worse to be silent and to not show your support for the Black community.”