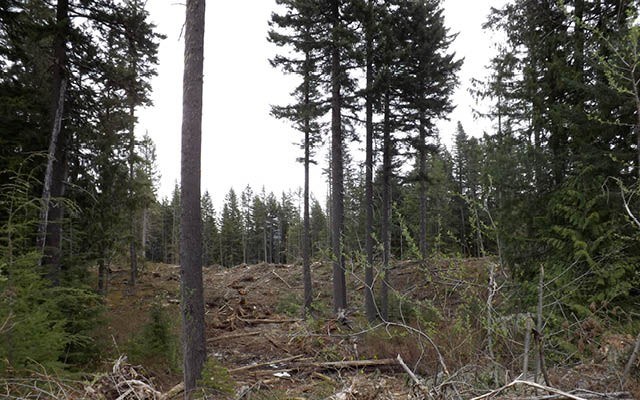 Plans for logging in the community forest continue to raise concerns for some in Whistler.

At an open house on the plans April 30, Alan Crawford of Canadian Wilderness Adventures asked about one particular cutblock near his company's operations base in the Callaghan Valley.

"My immediate concern at this moment is that they're using cable logging," said Crawford as he pointed to a map showing a proposed cutblock on steep terrain, in an area where the trees are an average of 250 years old. "It's going away from the nicer logging they've been doing."

Cable logging leaves very linear cutblock edges. Crawford said he prefers selective logging techniques with non-linear edges. He also likes it when small stands of trees are left within the cutblock because many tourists don't recognize the end result as a logged area.

Tom Cole of Richmond Plywood, the company contracted to harvest trees in the community forest, said adjustments can be made to the plan to make the cutblock look less offensive by doing some selective cutting at the edges of the cutblock to eliminate straight lines.

The chair of the Cheakamus Community Forest Society, Jeff Fisher, added that a strip of trees could also be left across the centre of the cutblock to improve the look of the final result, and said that there will be further discussion on Crawford's concern.

Claire Ruddy, the AWARE executive director, said the organization is concerned that opportunities to preserve old trees are being missed, adding, however, that the concerns are being heard as everyone involved in the discussion is working together.

"I think that we've provided some really usable data... through our tree coring work that's been going on for the last three years," said Ruddy. "While they're not out there counting the rings in trees, we have been. Through that we've made some good inroads, including identifying Whistler's oldest tree on record."

One of the initiatives the community forest administrators are working on is an effort to ensure every body of water in the community forest has a tree buffer. Provincial regulations allow logging right to the edge of small ponds and lakes leaving them vulnerable to become part of a large harvest area.

The community forest society goal this year is to log 20,000 cubic metres of forest.

Fisher said at the open house that about 23,000 cubic metres were harvested last year, explaining that the 2013 amount was higher than previous years due to challenging conditions in the years leading up to 2013.

The community forest logging plan, released in March, indicates as much as 27,696 cubic metres could be logged this year.

The open house at the Whistler library was held to give anyone with feedback on the logging plans an opportunity to have a discussion with the decision-makers.