Looking for a ride to Argentina? 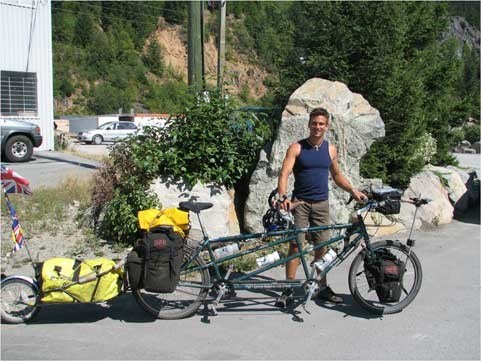 Originally from England, Dominic Gill is cycling from Alaska to Argentina. Photo by Andrew Mitchell

Dominic Gill, 25, is not the first person to cycle from Prudhoe Bay on the north tip of Alaska to the southernmost tip of Argentina – a distance of over 30,000 km by road. He probably won’t be the first person to make the trip on tandem bike, either.

But when it comes to going solo on that tandem bike, pulling a trailer behind the whole way, for a total bike length of more than 14 feet and a riding weight of 200 pounds, you can only admire Gill’s tenacity.

He started the trip in June, and has so far traveled almost 4,800 km. Along the way he has invited locals to jump on the back of his bike to pedal sections of the road and estimates that he has had about 16 guest pedallers putting in anywhere from 30 km to 480 km in the co-pilot seat – including Larry Bagnell a Member of Parliament from Yukon Territory who confessed to not riding a bike in about 10 years. Still, he’s done the majority of the trip as far as Whistler, over 3,700 km, solo.

He plans to make a movie of the trip, and has collected footage from the beginning of his trip.

He stayed in Whistler on Monday night after meeting up with resident Wayne Dannhauer outside of Lillooet. Dannhauer offered Gill a place to stay for the night, and gave him some advice for the next leg of his trip, which includes a side trip to Victoria and a week-long break in Vancouver. Gill lived in Vancouver six years ago, and will use the time to rest and "fatten up a bit."

But while he hasn’t had as many guest riders as he would like, Gill has had no problem meeting people.

"It’s funny, if I was out there on a regular bike I don’t think anybody would notice me," said Gill. "The one comment I get the most is: ‘hey, you’ve lost a rider.’"

It got a little lonely for Gill on the roads through Alaska, Yukon and northern B.C. – when the caravan of campers wasn’t nudging him off the road – but he hopes to pick up more riding partners as he rides through more populated areas in the western U.S.

Mexico, Central America and South America should be the most interesting part of the ride given the quality of roads and warnings about thieves, but Gill is trusting in people.

"I’ll have faith in people until I’m proven otherwise," he said.

Gill also has faith that his story, when he finishes the trip sometime in the next 12 to 18 months, will be interesting enough to attract an audience. He says he has taken three mortgages on his home – one for his gear, one for his camera and another to fund the trip.

Gill also points out that he’s not a cyclist – at home in England he’s a carpenter by trade and a rock climber by hobby.

He’s also using the trip to raise money for a charity called Hope and Homes for Children, which finds homes for children orphaned by war, conflict and AIDS.

You can follow Gill’s progress online via his diary and photo gallery at www.takeaseat.org.

And if you happen to see him on the side of the road, feel free to join him for a few kilometres.