Luka Gordic's killer sentenced as an adult to life 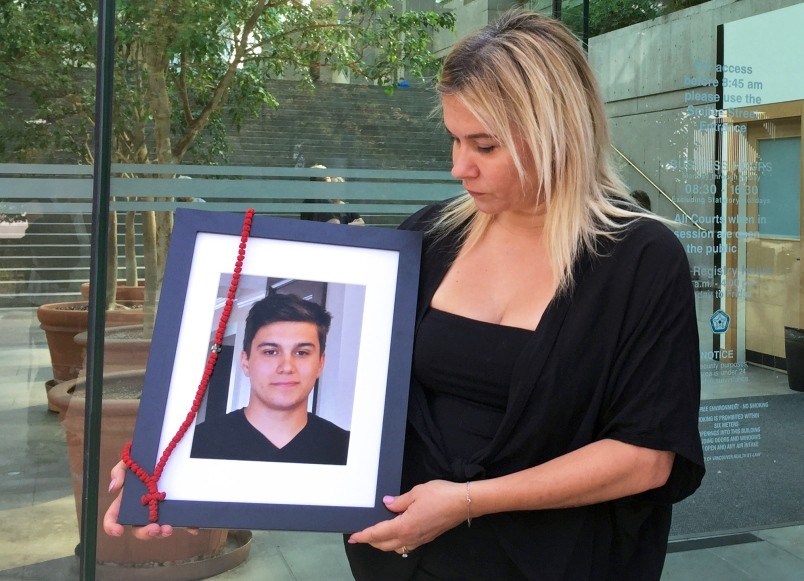 Clara Gordic holds a photo of her slain son Luka outside of the B.C. Supreme Court in Vancouver during a hearing held in 2018. File photo courtesy of <i>Burnaby Now</i>

Cheers and weeping erupted in a Vancouver courtroom Friday morning when a man who plunged a knife into the heart of Burnaby teen Luka Gordic during a swarming attack in Whistler in 2015 was sentenced to life in prison.

The man, who was three weeks away from his 18th birthday at the time of the attack, was sentenced as an adult for second degree murder by B.C. Supreme Court Justice Terence Schultes.

Two other men found guilty of manslaughter in the killing were sentenced as youths to 18 months in jail to be followed by 18 months of court supervision.

The family was satisfied with the sentences, according to Luka’s mother, Clara Gordic, who spoke to media outside the courthouse with her husband Mitch, Luka’s dad.

But nothing will ever be “finished” for Luka’s parents, according to Mitch.

“It only for me will be over when I die,” he said.

“We’re scarred for life,” she said.

Luka, 19, was swarmed by eight to 15 youths outside of a 7-Eleven in Whistler on the May long weekend in 2015 because of a dispute between him and one of the members of the group, 18-year-old Arvin Golic.

Gordic had sent a message to Golic earlier, confronting him about mistreating his ex-girlfriend and telling him to stop.

The attack lasted less than 10 seconds, ending in a fatal stab to the heart.

Golic was found guilty of manslaughter in June and handed a seven-year jail sentence.

On Friday, Crown prosecutor Hank Reiner called the sentences imposed on the other men convicted in the attack “reasonable” but expected them to be appealed as a matter of routine.

He became emotional as he spoke to media about the case.

“As a Crown, I’ve dealt with a lot of horrible cases, and this is right up there with about as bad as it gets. A completely lovely, innocent young man. He stood up to a bully and this is what he got,” he said.

Schultes' sentencing decision came after many delays that angered the Gordic family, but, in the end, it took less than five minutes for the judge to sentence the men.

He prefaced the sentencing by saying he had not yet finished writing up his reasons but that he did not want to delay the decision any longer.

“Since I have read and considered all of the material and the submissions and reached my conclusions, I consider it desirable, in light of the unfortunate stress on all of those involved in this matter caused by the previous adjournments of the sentencing dates, for which I apologize, to impose sentence today,” he said.

Schultes said he would complete his written reason “well within” the appeal period.

Because he has been sentenced as an adult, the man who stabbed Gordic could eventually be named, but his lawyer immediately asked Schultes to keep a ban in place to protect his identity until the end of the appeal period.

The three men have 30 days to appeal.

This article originally appeared in Burnaby Now on Friday, Jan. 11.