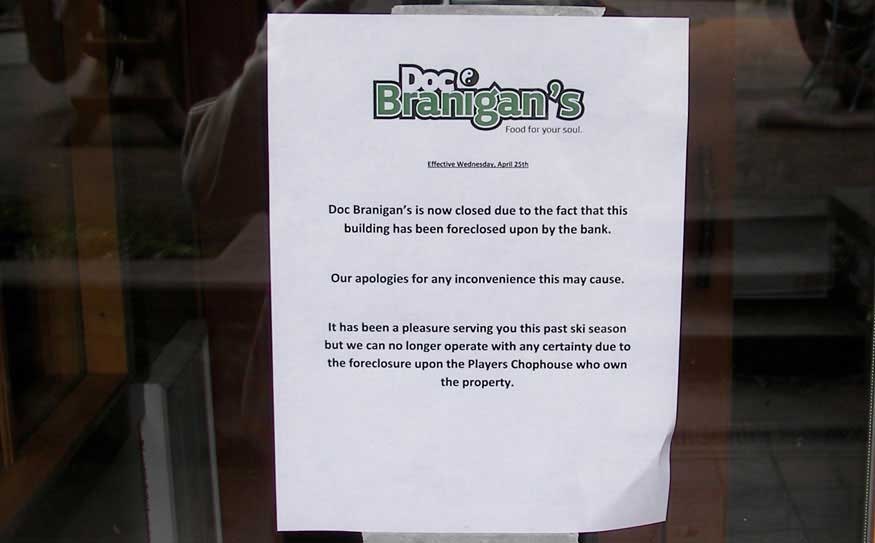 SIGN OF THE TIME Doc Branigan's at the corner of Highway 99 and Lake Placid Road is one of a number of restaurants to close in the last few days. photo by John french

Mac's convenience store will be setting up shop in Whistler in just a matter of weeks and while the store shelves are being stocked a number of other Whistler businesses are counting losses.

Property manager Drew Meredith said Calgary-based restaurant chain Original Joe's has purchased the Elephant & Castle brand. The new owners of the chain confirmed through a public relations representative that it has no plans at this time to open an Original Joe's outlet in Whistler.

According to Meredith, the future of the space is wide open.

"Whistler is a very competitive environment for food," said Meredith.

Because of that he said the space at the Delta might be renovated to create a smaller food operation and some new retail spaces.

Meanwhile, at Creekside there is a sign on the front door of Doc Branigan's thanking its customers and apologizing for any inconvenience created by the closure of the restaurant.

The sign reads: "Doc Branigan's is now closed due to the fact that this building has been foreclosed upon by the bank."

While details are not clear Rob Ward, a spokesperson for Players Chophouse, which owns the space rented by Doc Branigan's, said he doesn't know if the closure is temporary or permanent.

"At this point we're not sure what Doc Branigan's is doing," Ward wrote in an e-mail message to the Pique. "Any contact I've tried to make has not been responded to."

David Branigan, Doc Branigan's managing partner, would only offer a brief statement when contacted by the Pique.

"It is not a tenable business situation at this time," he said.

Branigan was working toward changing the liquor license so the restaurant could offer more entertainment varieties in the space but, he said, the shareholders decided to cut their losses and cease operations.

Branigan told the Pique when the operation first opened last year that the owner of the building and the holder of the liquor license offered him a very favourable lease rate to operate in the space.

Back in the village, the doors of the Pizza Café are also closed and have been for more than a week. Miro and Dana Kolvek own the European café at the corner of Lorimer Road and Main Street. Miro Kolvek was one of the six candidates in the running for the job of mayor in the last municipal election. Messages were not returned by the newspaper's press deadline.

The Savage Beagle also closed last month. For more on that story, turn to page 58.

Merrill, located in Whistler Village Centre beside Eddie Bauer, is preparing to shut down. Store manager Dave Booth said June 27 will be the final day of operations.

"It was a lease issue and that's all I know," Booth said Monday while working at the footwear and apparel store.

An attempt was made to find another suitable location for the 111.5 square-metre (1,200 square feet) store, said Booth, but the company couldn't find a space in Whistler that met the company's criteria.

The decision was made to close the store, the only corporate Merrill store in Canada, so Booth said three full-time jobs are being eliminated along with four part-time jobs.

A representative of Whistler Village Centre said the owners of the retail space had no comment at this time on the space currently occupied by Merrill.

While the businesses hit hard by the current economic state are finalizing closures Mac's is pushing ahead to launch its Whistler store in the space formerly held by Rogers Video.

"We are excited obviously about getting into the Whistler market," said Mac's media spokesman Doug Hartl, adding that the opening date looks like it will be May 21.

Mac's is part of Couche-Tard, the largest convenience store operator in Canada has a network of over 2,000 stores in Canada as well as a considerable presence in the U.S., with more than 3,300 additional stores.

According to the Mac's website, "the stores are located in high-traffic areas with the design of the stores based on attracting clients in their local markets rather than conforming to a single model. Most of the stores are open 24 hours a day, seven days a week, with high traffic customer flow early in the morning and late in the afternoon."

The Whistler store will be a 24-hour location.

Said Hartl: "We are an innovative company and we like to go into areas and we don't go into areas where we don't think we will be successful. Whistler has got it."

Asked if there was any concern that Whistler already has a convenience store in 7-Eleven Hartl said: "Everybody likes competition. Right? If we didn't think the market could support it we certainly wouldn't go in there."

When Whistler resident Cathy McGeough heard about Mac's moving in she was motivated to write a letter to the editor to express her opposition to the new addition to Whistler's retail roster.

"We need to look at what we need and not what we have already," McGeough said in a phone interview.

She said Whistler needs another gas station before it needs a convenience store just around the corner from the established 7-Eleven store on Main Street.

— With files from Clare Ogilvie