Female suspect arrested Wednesday in connection with Peak 2 Peak BASE jump
Feb 14, 2014 6:15 AM By: Brandon Barrett 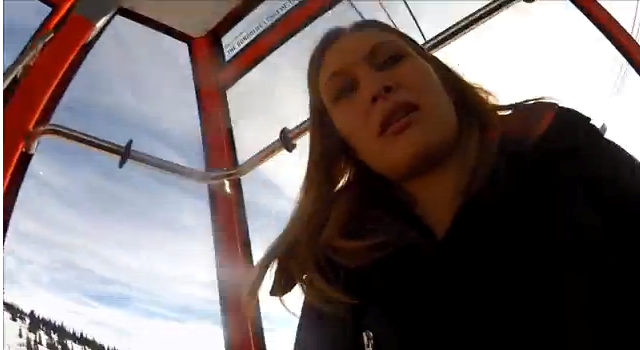 A screenshot from one of two videos posted to YouTube allegedly showing an illegal BASE jump from the Peak 2 Peak Gondola. A 23-year-old female suspect was arrested Wednesday, Feb. 12. The male suspect is still at large and faces up to 10 years in prison. Internet image captured

Police believe the suspect in last week's brazen Peak 2 Peak Gondola BASE jump is from Ontario, and continue the hunt for the 25-year-old daredevil.

Based on information gathered from Facebook, police initially said the suspect could be from out of country, but further investigation revealed the man is from Ontario and holds a B.C. driver's license, according to Staff Sgt. Steve LeClair, who said RCMP is still unsure where the man currently resides or if he's a Canadian citizen.

Police are currently awaiting the issuance of an arrest warrant, said LeClair, and continue efforts to locate the suspect.

Officers using four police vehicles and a snowmobile were unable to locate the male suspect on the day of the incident despite an extensive search of the landing area, LeClair said Friday, Feb. 14.

"One police officer was able to get a snowmobile from a commercial operator, went up and met with ski patrol and found out where the patroller had last spotted the suspect," explained LeClair. "Then a police dog was taken in and a track was commenced through the wooded area and ended up on the Gear Jammer ski run after quite a circuitous track through the woods along a snowmobile trail, and that’s where the trail was lost."

On Wednesday, Feb. 12 police arrested a 23-year-old female thought to be an accomplice to the alleged BASE jump on Feb. 6, a stunt that was apparently filmed and posted to YouTube in two separate videos.

"(The female suspect) was interviewed on Feb. 6 so at that point we knew her identity, but it wasn't until a subsequent investigation revealed her on surveillance video in the village with the suspect male and a subsequent YouTube video (that police had reason to believe she was involved)," said LeClair.

The woman, who is from Ontario but resides in Whistler, originally told police she did not know the male BASE jumper and was riding the gondola to meet a friend on Blackcomb Mountain, LeClair said.

Two YouTube videos posted in the days following last week's reported incident showed a male suspect appearing to jump from a moving gondola cabin. The doors of the cabin were physically pried open using "mechanical advantage," and caused an estimated $10,000 in damage, according to Whistler Blackcomb.

One of the clips was apparently shot from the jumper's helmet camera, while the second shows what appears to be the same jump from the female suspect's perspective. In both videos, which have since been made private by the original posters, the female's face is clearly visible.

The woman was arrested at her place of employment just after 3 p.m. CBC reported that the female has worked at Longhorn's Saloon for three years, but this has not been confirmed by police, according to LeClair. Police have recommended charges of mischief over $5,000, which carries a maximum prison sentence of 10 years, and obstruction for providing officers with misleading information. The max penalty for obstruction is two years in prison. Whistler Blackcomb has said that both suspects could face a lifetime mountain ban.

The female suspect has been released with a promise to appear in North Vancouver court April 2.

A video titled "The McConkey" in an apparent tribute to late BASE jumper Shane McConkey was posted to YouTube Feb. 8 by someone with the username "Graham Dickinson" showing a man with a GoPro camera fixed to his helmet BASE jumping from a gondola cabin. The man is accompanied in the cabin by a female identified as "Kat" in the video, who is seen filming with a separate camera.

A second video posted Feb. 9 by a username "Graham D" shows what appears to be the same jump from a second camera.

BASE jumpers McConkey and Miles Daisher leaped from the Peak 2 Peak in 2008 in a jump that was sanctioned by Whistler Blackcomb to mark the gondola's opening.